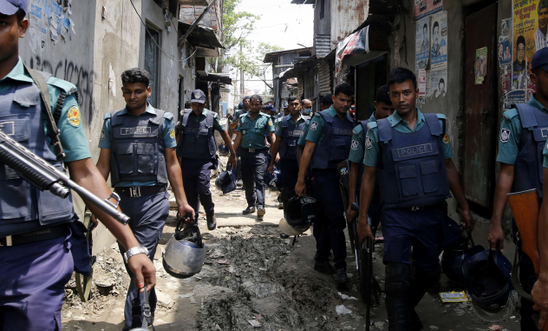 More than one killing a day in past 18 months, with people typically ‘disappeared’ by authorities before bodies later found

‘The victims were not arrested, let alone put on trial’ - Dinushika Dissanayake

The Bangladeshi authorities have allegedly killed hundreds of people in a wave of extrajudicial executions under the guise of an anti-drugs campaign, Amnesty International said in a new report released today.

The 25-page report - Killed in ‘Crossfire’: Allegations of Extrajudicial Executions in Bangladesh in the Guise of a War on Drugs - reveals extensive allegations of enforced disappearance and evidence fabrication by law-enforcement agencies.

Reports of extrajudicial executions in Bangladesh have shot up since Prime Minister Sheikh Hasina launched an anti-drugs crackdown on 3 May 2018, with 52 people killed by law-enforcement agencies within just ten days of the announcement. In total, during 2018 there were 466 suspected extrajudicial executions in the country, more than three times the number recorded in 2017.

Instead of launching proper investigations into these killings, the authorities have allegedly sought to fabricate evidence to support their “gunfights” or “crossfire” claims. In interviews with Amnesty, supposed “witnesses” revealed that they had not seen the killings but were asked by the police to provide false statements supporting the police version of the deaths.

All the victims of the supposed “gunfights” appear to have been forcibly disappeared by the police and the Rapid Action Battalion - sometimes for up to six weeks - prior to their bodies being discovered. When relatives sought information over their whereabouts, the authorities either denied they were in their custody or refused to say where they are.

“The ‘war on drugs’ has led to the death of at least one person per day.

“Wherever there has been involvement of the Rapid Action Battalion, it appears they have acted outside of the law - the victims were not arrested, let alone put on trial.

“The ‘anti-drugs’ operations have spread terror in some of the country’s poorest neighbourhoods, where people fear the slightest suspicion of being involved in drug abuse may lead to their loved ones being subjected to another alleged extrajudicial execution.

“These killings have taken place in the wider context of a blanket prohibition of drugs
under which the government has deliberately punished and violently attacked people, particularly those from the most marginalised communities.

“The Bangladeshi authorities must put an end to these killings immediately.”

Claims of ‘crossfire’ and fabricated evidence

Bangladeshi officials have routinely claimed that the victims of apparent extrajudicial executions were caught up in ‘crossfire’, where suspects fired the first shot at the members of law-enforcement agencies, forcing them to resort to lethal force.
Amnesty spoke to supposed “witnesses” who said that they were involuntarily taken to the crime scene only after the killings had taken place. One “witness” said:

“We did not see anything. They called and took me with them to the location around 5.30am and asked me to witness what they were taking from there. I only saw a motorbike and nothing else.”

At least five witnesses interviewed by Amnesty said that they were involuntarily taken to the spot after the incident. They said they could not refuse police requests to act as witnesses, fearing harsh consequences. Security forces took names, signatures, phone numbers and personal details of the witnesses.

Extortion and reports of ‘gunfights’

Suleman*, a 35-year-old-man who lived with his young daughter in a thatched hut, was killed in what police said was a “gunfight” though his relatives say police attempted to extort money from them for his release from detention. Before his death, Suleman phoned a relative saying that police were demanding 20,000 takas (£190) for his release. One of Suleman’s family confirmed to Amnesty that he paid this sum, however police then allegedly demanded another 50,000 takas - “or else they will kill me,” Suleman told the relative. Desperate to locate him, relatives went to a police station where they were told he had been transferred to prison. Three or four days after the phone call, they were told Suleman had died in a “gunfight”.

Amnesty is calling on the Bangladesh authorities to carry out a prompt, impartial, independent and effective investigation into the wave of apparent extrajudicial executions and other human rights violations committed by the police and Rapid Action Battalion as part of its ongoing anti-drugs operations.

Amnesty documented a total of seven cases of alleged extrajudicial executions by visiting the locations of the incidents as well as interviewing 40 people including families of the victims, “witnesses” whose statements were coerced by law- enforcement agencies, people in the neighbourhood where the incidents happened, and human rights activists in Bangladesh.

Names have been changed (indicated by an asterisk) to protect the families of those concerned.