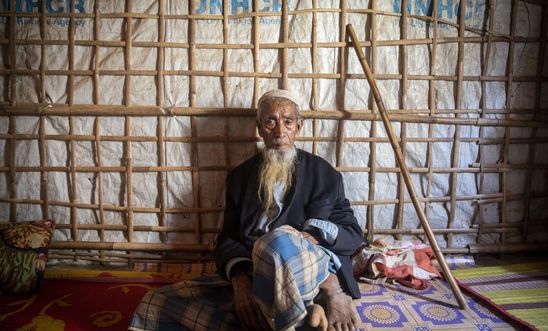 Older Rohingya refugees in overcrowded camps in Bangladesh are being left behind in the response to COVID-19, Amnesty International warned today as it released new research on the humanitarian response to the deadly pandemic.

Bangladesh, together with the UN and other humanitarian partners, has made efforts to reduce the risk of COVID-19 spreading to the camps outside Cox’s Bazar, including a recent decision to increase COVID-19-specific assistance, stop large gatherings, and order preventative measures.

But Amnesty’s new research has found basic, accurate information about the illness and measures to prevent its spread is failing to reach many people in the camps, and especially older people, as the humanitarian response pays insufficient attention to their specific needs.

“At the best of times, humanitarian organisations struggle or fail to meet the specific needs of older people in refugee and displacement camps.

“Repeating this same mistake amid the COVID-19 pandemic puts older Rohingya women and men in imminent danger – with some of them not even receiving the most basic information about what is happening and how they can best stay safe.

“Older displaced people face a devastating combination: they are the group most at-risk of COVID-19, and they are also the group least included in humanitarian response. Their invisibility must end now. Governments, donors, and humanitarian organisations must put older people at the centre of their planning and response, to minimize the deadly consequences of this global pandemic.”

In June 2019, Amnesty International released a report on the impact of conflict and displacement on older people in Myanmar. It examined how, in the Bangladesh refugee camps, the humanitarian response has failed to respect older people’s rights to health, food, water, and sanitation. Many problems stem from not including older people’s views and inputs and from not considering their needs and risks when designing assistance.

Amnesty is warning these same mistakes are being repeated with the COVID-19 response, despite all medical evidence demonstrating that older people are one of the most at-risk populations.

In the last week of March, Amnesty interviewed 15 older Rohingya women and men living in seven of the 34 refugee camps near Cox’s Bazar.

Most older people interviewed by Amnesty had received little specific information about COVID-19. Before large gatherings were barred and preventative measures like social distancing ordered, there were some informational meetings in the camps, but many older people were not informed. Those who knew about them were unable to attend because of physical disabilities that made it difficult, if not impossible, to navigate the camps’ hilly terrain.

Only one of the 15 older people interviewed by Amnesty had anyone come to their shelter to provide information about COVID-19. A few others received news through family members about the disease and preventative measures like frequent hand-washing. Most had heard primarily from religious leaders and neighbours, with little detail other than the virus was very dangerous and they needed to “live clean”. As a result, fear is rampant.

“I’m very afraid, because if the virus arrives to the camp, no one will be alive, as here many people are living in very small place,” said Hotiza, a woman around 85 years old.

Access to information for all residents has been restricted in the camps generally since the Bangladesh authorities cut off access to telecommunications and the internet in September 2019. Amnesty, the UN, and many other organisations have called for such restrictions to be lifted immediately.

However, even if telecommunications are restored, efforts specifically targeted at older refugees will remain vital, as many do not have access to smartphones.

In attempts to remedy this, the Bangladesh authorities and humanitarian organisations have designed creative ways to disseminate information, including through attaching megaphones to tuktuks and blasting messages in the camps in the Rohingya language about COVID-19 and preventative sanitary measures. But while most older people interviewed knew such messaging was happening, they often were not able to hear the messages in detail or at all.

Some older people had not even received the most basic of information.

“I didn’t hear any new things, just people are saying, ‘A disease is coming, pray,’” said Abdu Salaam, 70, who said he had a physical disability that left him unable to walk well. He also lacked access to adequate care for pain and other significant health problems.

In the absence of sound medical advice, the family of at least one older person interviewed had resorted to buying an unproven medicine to “save” them from the virus.

Amnesty is calling on donors, the UN, and humanitarian organisations to act urgently to ensure older people can access critical information safely and quickly, as well as put preventative measures into practice, including by ensuring older people have access to sufficient water and sanitation infrastructure.

The current challenges in the camps near Cox’s Bazar during the COVID-19 pandemic show how the UN and donors appear to be replicating the same failure to prioritise older people as they have long done in wider humanitarian efforts. The UN Global Humanitarian Response Plan to COVID-19 did not include older people as a separate “most affected and at-risk population group”. Rather, “old age” was included at the end of a list of “conditions” framed as “people suffering from…”.