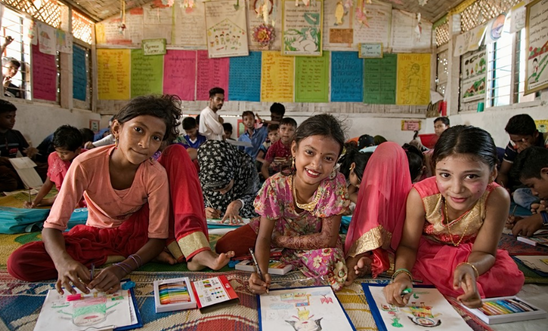 An estimated 500,000 children are failing to receive an education in Cox's Bazar. © UNICEF/SUJAN

The international community must share responsibility for the education of Rohingya children in the camps in Cox’s Bazar in Bangladesh, Amnesty International has said ahead of the first Global Refugee Forum.

It is estimated that more than half-a-million children have not set foot inside a classroom since they arrived in the refugee camps more than two years ago.

Access to appropriate quality education is fundamental to equip the Rohingya children with knowledge they can use to enjoy and claim their rights, while also contributing to the economy irrespective of where they are.

The Global Refugee Forum, hosted by the UN’s refugee agency in Geneva from Monday 16 to Wednesday 18 December, has made education one of its six key themes.

“The Rohingya children in the camps in Cox’s Bazar must not become a lost generation.

“The international community must accept that they will not be able to return home to Myanmar any time soon, and they cannot continue to see their futures slowly stolen from them in conditions where they are being denied their right to education.

“When a child receives an education, everyone benefits. Both Bangladesh and the international community must step up and share the responsibility of educating all children in Cox’s Bazar - Rohingya refugees and the host community as well.

“It is in everyone’s interests to see that all children in Cox’s Bazar receive a quality education as is their right. Education can lift entire communities. Far from being a burden on a national economy, it should be seen as an investment that will yield great dividends. But the denial of education can have very negative consequences.

“The Bangladesh government can start by lifting the restrictions on education for refugees currently in place.”

Shortage of teachers in Cox’s Bazar

The Bangladeshi host community in Cox’s Bazar itself suffers both from a shortage of teachers and high student dropout rates, due in part to pressure on children to enter the workforce early to meet the higher cost of living as household incomes continue to fall.

According to a needs assessment released by the Inter Sector Coordination Group in October, nearly one-third of 1,311 households surveyed in Cox’s Bazar have at least one primary or secondary school aged child not attending school.

This year’s Joint Response Plan for Rohingya refugees and the host community in Cox’s Bazar received only 40 percent of the funding requirement for education out of £45 million, as of October. Humanitarian officials fear that funding for education may decline further next year.