Bangladesh: Death sentences for 152 mutineers a 'perversion of justice' 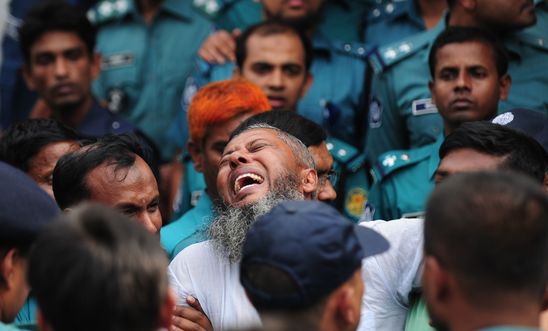 Today’s death sentences handed down by a Bangladeshi court to 152 people involved in a 2009 mutiny are a perversion of justice, Amnesty International said.

“Justice has not been served with today’s ruling, which, if carried out, will only result in 152 more human rights violations.

“There is no question that the 2009 mutiny was a brutal series of events that left in its wake scores of people dead and a traumatised population. It is understandable that the Bangladeshi authorities want to draw a line under this episode, but to resort to the use of the death penalty can only compound the suffering.

“With these sentences, Bangladesh has squandered an opportunity to reinforce trust in the rule of law by ensuring the civilian courts deliver justice. Instead, the sentences seem designed to satisfy a desire for cruel revenge. The death penalty is the ultimate cruel, inhuman and degrading punishment and has not been proven to be a deterrent to crime.”

Those sentenced were among hundreds of troops from the Bangladesh Rifles (BDR) convicted of engaging in unlawful killings, hostage taking and other human rights violations committed during the February 2009 mutiny. Amnesty previously condemned the violence and called for those responsible to be brought to justice in fair trials.

Large-scale mutiny broke out at the BDR headquarters in the Bangladeshi capital Dhaka on 25 February 2009, just two months after a newly elected government took office.

It quickly spread to BDR barracks across the country and mutineers allegedly killed at least 74 people, including six civilians and 57 army officers, one army soldier and nine Jawans (lowest BDR rank). It took the government 33 hours to negotiate an end to the mutiny.

Thousands of BDR personnel were detained because of their alleged role in the mutiny. In 2009, Amnesty gathered testimony from family members of detainees accused of taking part as well as government officials.

Scores – or possibly hundreds – suffered torture, and some were denied the assistance of a lawyer for weeks or months. Amnesty International documented some of the torture methods described by detained BDR suspects, including sleep deprivation for days on end, beatings, the use of pliers to crush testicles, the insertion of needles under the nails and electric shocks.

This widespread use of torture may have contributed to the death of dozens of BDR detainees in custody.

Following the mutiny, the Bangladesh Rifles were renamed the Border Guard Bangladesh.