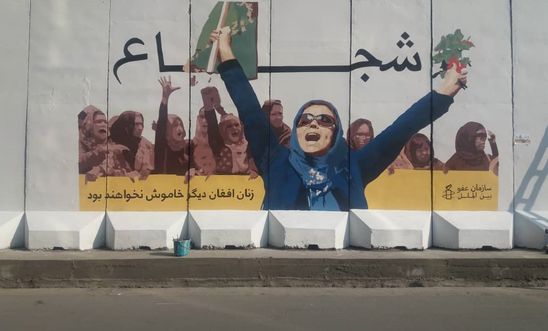 Amnesty International today unveiled a mural in Afghanistan’s capital Kabul to celebrate the remarkable achievements of the country’s women.

The mural depicts Afghan women protesting for their rights, demanding equality and raising their voices for justice. It has been painted as part of Amnesty’s Brave campaign to promote the rights of human rights defenders.

“Afghan women are famous for their resolve and we are celebrating that this International Women’s Day.

“Despite more than 17 years of conflict, they have made remarkable strides. They are lawyers, doctors, judges, teachers, engineers, athletes, activists, politicians, journalists, bureaucrats, run their own businesses, and are in the ranks of the military and police.

“These hard-won advances must not be rolled back at any cost. Women have been at the forefront of the calls for peace in Afghanistan. But there can be no peace process worthy of the name that excludes women or compromises on their rights. Afghan women cannot be ignored or silenced.

“It is crucial that Afghanistan builds on the limited but important gains made on women’s rights so that we are able to confront the many challenges that remain.”

Under Taliban rule, women’s rights were violated with impunity. Women were not allowed to freely exercise their human rights, including the rights to freedom of movement, to education, and to work.

Now, there is a dedicated Ministry of Women’s Affairs, with departments throughout the country at provincial levels. Afghanistan also has an Independent Human Rights Commission chaired by a renowned woman human rights defender, Sima Samar. Women also constitute 27 per cent each of parliament and the civil service.

In 2009, Afghanistan passed the law on Elimination of Violence Against Women, after a hard-fought struggle led by women human rights defenders. The law, which fell into disuse after parts of it were absorbed into Afghanistan’s revised Penal Code, was reaffirmed by President Ashraf Ghani in March 2018.

Despite these advances, Afghan women continue to endure great challenges when it comes to their human rights.

A United Nations Assistance Mission in Afghanistan (UNAMA) report last year found that there are worryingly few prosecutions of violent crimes against women. More than half of the 237 cases monitored by UNAMA between 2015 and 2017 were instead referred for ‘mediation’ - in violation of the Elimination of Violence Against Women law.

The UNAMA report also found that in 280 murders of women, there were convictions in only 50 cases. Most of the cases were not even heard by the courts.

In December 2018, members of Afghanistan’s women’s football team came forward to speak out against the sexual assault and harassment they suffered. At the time, Hafizullah Rahimi, the head of Afghanistan's Olympic committee, said: “Sexual abuse does exist, not only within the Football Federation but in other sports federations as well. We have to fight it.” An investigation is currently underway.

Since peace talks between the USA and the Taliban have begun, there has been extremely limited participation of women and no serious discussion on women’s rights.

This is the second mural that Amnesty International has unveiled in Kabul as part of its Brave campaign. The first mural was consecrated to the memory of journalists who have been killed doing their jobs, depicting the famous Afghan photographer Shah Marai of Agence France Presse.

Around the world, attacks against ordinary people who stand up for freedom, justice and equality are surging. Amnesty’s Brave campaign is calling on the UK Government to make supporting these human rights defenders a priority.