Podcast: Steve Kelly on a long fight for justice following the Hillsborough Disaster 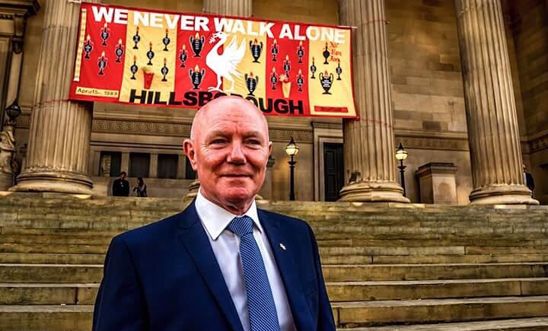 Saturday 15 April marks 28 years since the Hillsborough Disaster, which remains the biggest sporting disaster to take place in the UK.

On 15 April 1989, 96 men, women and children died in a crush at the football stadium in Sheffield, England.

In the aftermath, Liverpool fans were blamed for the deaths. It took a group of tenacious campaigners – the families and friends of the fans killed – to clear the names of their loved ones and eventually get justice, 27 years later. One of those campaigners was Steve Kelly.

Listen to Steve’s story, in his own words

Deception and cover-ups from the start

‘Mike was such an experienced football fan, so I thought, “Oh he’ll have made his way out”, not knowing it was impossible to get out of them pens’
Steve Kelly

Steve’s brother, Mike, was one of the last bodies to be identified at the Hillsborough grounds. After he’d not heard from Mike, Steve went to Sheffield to investigate.

Steve diligently answered questions from the police once Mike had been identified as one of the dead. Little did he know that innocent answers about Mike and who he was would be used in the case against him, and to build a bigger picture of fans who were drunk and beyond control.

‘Filling in forms – did Mike like a drink? Did Mike go to the pub before the match? I didn’t realise I was helping make their case then. And I was so, so vulnerable. And I think they used that to their advantage… We didn’t realise at the time, we were actually vilifying our families. We were giving them [the police] what they wanted.’
Steve Kelly

Liverpool fans like Steve’s brother were immediately blamed for the deaths in the aftermath - the police and some media painted them as drunken hooligans.

The effect on the families and the community in Liverpool was devastating. But Steve and others were determined to clear the names of the loved ones missing from their lives.

The long campaign for justice for the 96

After years of campaigning by the family and friends of the deceased, people like Steve eventually uncovered the truth – that those really to blame were the police, ambulance services, and those who designed and managed the stadium – the authorities who they thought would help them. The fans were not at fault. The Human Rights Act was a vital part of this process, and helped the families uncover what happened to Mike and the 95 others who died that day.

A 1991 inquest into the tragedy found that the 96 had died due to ‘accidental death’, with the disaster blamed on the Liverpool fans’ behaviour. They were characterised as drunk and unruly. But the families of those who were killed refused to accept this version of events. For years, they campaigned to clear their loved ones’ names.

A second inquest into the disaster was announced in 2012. At this point, the Hillsborough families used the Human Rights Act – which protects ordinary people’s right to life – to ensure the inquest had the power and scope to uncover the truth.

It became the longest jury case in British legal history.

In April 2016, the jury concluded that those who lost their lives at Hillsborough were unlawfully killed, and that mistakes made by the police, ambulance services and those who designed and managed the stadium had contributed to their deaths. Crucially, it also found that the fans were not to blame for the disaster.

‘When we got the verdict, his [Mike’s] name was clear. He wasn’t a hooligan. He was unlawfully killed.’
Steve

More about the Human Rights Act and Hillsborough