A mother aged 11, after she was raped by her stepfather 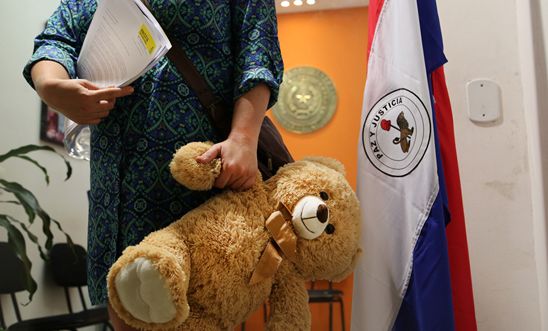 A young girl in Paraguay being referred to as 'Mainumby' has given birth by caesarean section. Pregnant after she was repeatedly raped by her stepfather, Mainumby is a mother at just 11 years old.

Mainumby's mother is reported to be looking after both her own child and her daughter's newborn baby.

Mainumby is lucky to be alive. She has not made the choice to become a mother at her age. When they first discovered that Mainumby was pregnant, knowing the huge risks to her health and ultimately her life, her family asked for the pregnancy to be terminated. But the hospital and later other authorities refused: abortion is illegal in Paraguay, with the exception of cases where the life of the woman or girl is at risk. For this young girl, the risk to her life was undeniable, but still she was repeatedly refused a termination and forced to carry her pregnancy to term.

Thank you to the 134,000 people in the UK who emailed the Paraguayan authorities calling on them to protect the young girl’s life.

While Mainumby has not had her rights respected, she is thankfully safe. We will continue to press Paraguay to respect the rights of women and girls to terminate their pregnancy if their life is at risk.

In April this year, Mainumby's mother took her then ten-year-old daughter to hospital after she had complained of severe stomach pains. The doctors discovered that the girl was 21 weeks pregnant, a result of being raped by her stepfather.

The man’s disgusting act put his stepdaughter’s life in serious danger – her young body struggled to safely carry a child as it was simply not developed enough for a safe pregnancy.

Regrettably, authorities in Paraguay did not act on their duty to protect the life and health of the young girl by granting her family’s wish to terminate the pregnancy.

The girl’s stepfather has been arrested for abusing and raping the girl.

Mainumby's mother is now taking care of both her daughter and grandchild. She had reported her partner's abuse to the police before Mainumby fell pregnant, but the police failed to investigate her claims. Despite this, the mother faces charges of ‘failing in her duty of care’ for her daughter.

The Paraguayan authorities have been playing with Mainumby's life, well-being and best interests by not providing her with the possibility of terminating her pregnancy. Their failure to protect her life treated the young girl's body like a vessel, without respect for her own rights. They also flouted Paraguay's own laws, as abortion is legal where the mother's life is at risk.

Paraguay has also signed up to the Convention on the Rights of the Child, which states that the best interest of the child has to always be of primary consideration. The Paraguayan authorities are obliged to ensure access to life-saving medical treatment, including termination, in these circumstances.

After Mainumby's case made headlines, a district judge set up an interdisciplinary panel of medical professional to advise on her case. It was a positive step, and something we were calling for.

The panel concluded that the girl’s pregnancy was four times more life-threatening than an adult pregnancy and carried health risks including haemorrhage post-birth, anaemia, and damage to her reproductive health. Despite the panel’s ruling that Mainumby's life was clearly in danger, still the authorities refused to grant her access to an abortion.

The panel’s recommendation was swiftly followed by a request from human rights body the Inter-American Commission on Human Rights (IACHR) who called on Paraguayan authorities to protect Mainumby's life, health and physical and mental integrity. They requested that she was given access to adequate medical treatment, including all available options to manage the high-risk pregnancy, and to ensure that her rights were guaranteed in all health-related decisions affecting her.

The health risks to young girls during pregnancy

According to the UN, girls aged 10-14 make up 2.13% of maternal deaths in Paraguay. The World Health Organisation and health professionals around the world agree that pregnancy poses specific risks to young girls whose bodies are not fully developed – carrying a child can lead to health complications, and in some cases death.