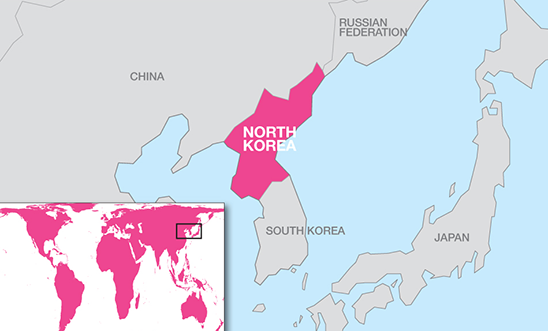 North Korea is in a category of its own when it comes to human rights violations. It is a totalitarian state where tens of thousands of people are enslaved and tortured.

State authorities repress all forms of freedom of expression. Anyone attempting to assert their rights faces brutal punishment. Failing to show sufficient reverence for the country's leaders is a serious offence.

In North Korea, potentially no one is safe from arbitrary arrest and imprisonment.

The Democratic People’s Republic of Korea (DPRK or North Korea) and the Republic of Korea (South Korea) were established after UN-supervised elections in 1948. In 1950 the Korean War broke out between the North and South. In 1953 both states agreed to a ceasefire but they officially remain at war with each other.

Under its leader Kim Jong-un, North Korea is violating every conceivable human right.

The government represses all forms of freedom of expression and opinion; it does not allow any organised political opposition, independent media, free trade unions, civil society organisations, or religious freedom.

As well as widespread and systematic human rights violations, North Korea is also suffering from a food crisis. There is mass malnourishment and reports of people starving to death are common.

100,000 people, including children, are detained in political prison camps and other detention facilities in North Korea.
Conditions are dire. Torture is rampant and public execution is common. Many of the prisoners die of malnutrition and overwork.
In this video, former prisoners and their captors expose the horror of daily life inside these camps.
Many prisoners have not committed any crime whatsoever but are merely family members of those deemed guilty. They are detained as a form of collective punishment known officially in North Korea as 'guilt-by-association'.

'We worked in the farms from 7am to 8pm. We cultivated corn. We were divided to work in units comprising 10-15 people...
If the unit did not meet the daily target, the unit members were punished collectively. During the course of our detention, often we did not meet our targets because we were always hungry and weak. We were punished with beatings and also reductions in our food quota...
In the 'Ideology Struggle Sessions' that were held after work, those who did not meet the tarot [quota] were severely criticised and beaten by other inmates.'
Kim and Lee, a couple detained at Kwanliso 15 between 1999 and 2001

We have been monitoring the growth of prison camps in North Korea for a number of years. In October 2013, we published satellite images of two of the country’s largest prison camps, which showed that since 2011 new housing blocks had been built and work facilities had been expanded. Security is very tight with perimeter fences and guard towers clearly visible.

‘After a night of “servicing” the officials, the women had to die because the secret could not get out. This happens at most of the political prison camps.’
Prison guard

In response to the systematic denial of basic freedoms in the country, the United Nations Human Rights Council unanimously established a commission of inquiry in March 2013.
We had been calling for a commission for a number of years and as well as submitting our own evidence, including our satellite images of the camps, we also helped the inquiry gather personal testimonies which showed the human rights abuses individuals had suffered.
The commission’s report lays bare the gruesome reality of life in North Korea. The gravity and nature of human rights violations are off the scale.
The UN Security Council and the Human Rights Council should seize this opportunity and use their power and influence to ensure the North Korean government acts on the report’s findings.
The world can no longer say it does not know what is happening inside North Korea. Find out more
25 Feb 2015, 04:46pm