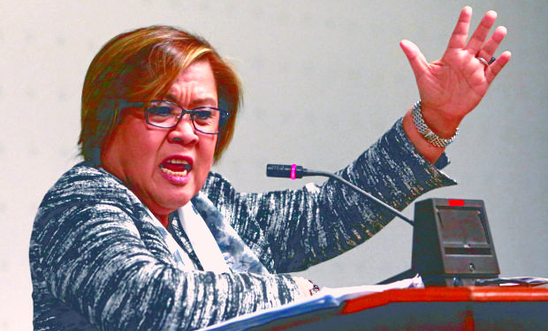 Sutton Coldfield Amnesty International group has taken up the case of a renowned human rights leader who has been imprisoned unjustly in the Philippines.

The group, which meets monthly in Sutton Coldfield, has adopted Leila de Lima as its latest Prisoner of Conscience and is campaigning for her release.

Philippines senator Leila de Lima has long been a critic of the country’s current president Rodrigo Duterte who has received international condemnation for his human rights abuses.

Senator de Lima has frequently spoken out against Duterte’s self-styled ‘war on drugs’ which has resulted in more than 12,000 extra-judicial killings in his two-year presidency.

Under previous presidencies, prominent lawyer de Lima was appointed firstly as Chair of the Philippine Commission on Human Rights and then as Secretary of the Department of Justice, where she investigated the activities of well-connected drug pushers.

As a senator, she campaigned against Duterte’s violent war on drugs but in February 2017 was arrested for supposedly violating the drug trafficking law – her charge featuring testimonies from those same drug-pushers she had jailed.

De Lima remains in custody, officially Duterte’s first political prisoner, and has been designated an Amnesty Prisoner of Conscience. The international human rights charity campaigns on behalf of prisoners of conscience – people who have been unjustly imprisoned because of who they are or because of their beliefs and who have not used or advocated violence.

The Sutton Coldfield group has now ‘adopted’ de Lima as its prisoner of conscience and is campaigning on her behalf. In recent years the group, along with other Amnesty International groups worldwide, has successfully campaigned for the release of prisoners of conscience in Myanmar, Azerbaijan and Uzbekistan.

Sutton group chairman Andrew Hindle said: “Supporting and campaigning for prisoners of conscience is at the heart of what we do and we are already working hard for our latest case – Leila de Lima.

“We have already written letters to officials in the Philippines and will share our campaign on social media in the New Year. Together with other Amnesty International members, we have successfully seen the release of other prisoners of conscience and we are hopeful our actions on behalf of Senator de Lima will also bear fruit.”

Sutton Amnesty International Group meets at 8pm on the second Tuesday of every month (except August) in the Conference Centre, Holy Trinity Catholic Church, 69 Lichfield Road, Sutton Coldfield, B74 2NU. New members are always given a warm welcome.