Morocco: Getting away with torture 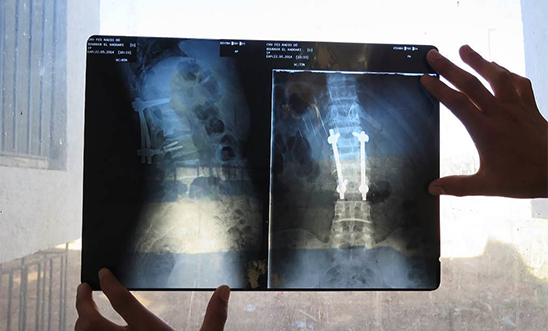 An x-ray showing a student’s fractured vertebrae after he said riot police pushed him off a roof during a campus protest. © Amnesty International

Following the uprisings in 2011, Morocco’s leaders promised to pursue new, progressive legal reforms, including prohibiting torture. But behind the liberal image of a human rights-friendly country, there is a much darker reality.

Beatings, asphyxiation, simulated drowning, psychological and sexual violence are among an array of torture techniques favoured by Moroccan security forces to extract ‘confessions’ and silence dissent.

Torture can happen anywhere, any time – from the moment of arrest, in broad daylight or behind the tinted windows of security vehicles.

Anyone can be tortured – protesters, political or student activists, as well as people suspected of terrorism offences or ordinary crimes.

‘Some carried long wooden sticks. They beat me from head to toe. Then a plainclothes officer gripped a handcuff in his fist and punched me between the eyes. I was knocked out and fell. Then the others came and stamped on my bladder until I urinated. They beat me until I passed out, then threw me outside the campus, as a warning to other students. The students thought I was dead.’

‘They threatened to rape me with a bottle – they brought the bottle in front of me. It was a glass bottle.’

Mohamed was arrested on suspicion of violent protest during a demonstration in Laayoune. After threatening to rape him, Mohamed claims that police officers continued to torture him during the three days he spent in police custody:

‘While I was suspended in the roast chicken position, they put a towel in my mouth and choked me by pouring water up my nose. Then they poured urine. Then they… took my clothes off except my underwear, and whipped me on the thighs with belts.’ Sketch of the ‘roast chicken’ technique, drawn under the guidance of detainee Ali Aarrass, who described being tortured in this way by Moroccan police in 2010.

Another protestor, arrested on the same day as Mohamed, told us a very similar account.

He said officers threatened to rape him with a glass bottle after stripping him to his underwear, threatened to kill him, that they beat him and stuffed a rag soaked in urine and bleach into his mouth.

Officers held his hand forcing him to sign several interrogation reports, and forced his fingerprint on other documents. He said he later found out his ‘confessions’ implicated two other individuals whom he did not know at the time.

While few officials are brought to trial for torture, survivors can face jail for speaking out under ‘false reporting’ and slander laws.

Moroccan authorities have launched eight prosecutions under slander laws against people who filed torture complaints over the past 12 months, which can result in up to five years in jail.

In 2014, two young activists, Wafae Charaf and Oussama Housne, were sentenced to two- and three-year prison terms respectively after they complained that they had been tortured. They had not even identified their alleged torturers. Families of prisoners who reported being tortured after their arrest.

Hundreds of men, women and children are speaking out about torture in Morocco and Western Sahara. But their words are falling on deaf ears. Investigations into torture are rare and few torturers have ever been punished.

This year, however, Morocco is reforming its justice system. It’s the country’s biggest opportunity yet to finally stop torture.

We’re calling on the Moroccan authorities to:

Downloads
Shadow of Impunity: Torture in Morocco and Western Sahara