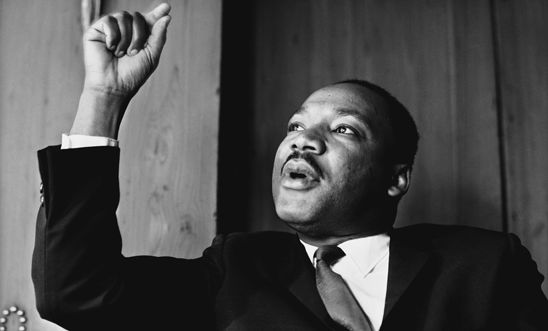 The American Baptist Minister Dr Martin Luther King Jr led the struggle against racial discrimination in 1960s USA, inspiring supporters with the power of his rhetoric. He advocated the principle of non-violent protest, affirming that opposition should be tackled with compassion rather than aggression.

Born on 15 January 1929 in Atlanta, Georgia, Martin Luther King was assassinated on 4 April 1968. He was awarded the Nobel Peace Prize for his commitment to non-violent struggle in 1964.

The civil rights movement in the USA made huge gains for African Americans, but discrimination still exists today. For example, Albert Woodfox has been held in solitary confinement in the USA for more than 40 years, in relation to his links with the Black Panther Party.

1. “The whirlwinds of revolt will continue to shake the foundations of our nation until the bright day of justice emerges.”

3. “Now is the time to make justice a reality for all of God’s children.”

4. “We must not allow our creative protest to degenerate into physical violence.”

5. “Here is the true meaning and value of compassion and nonviolence, when it helps us to see the enemy’s point of view, to hear his questions, to know his assessment of ourselves. For from his view we may indeed see the basic weaknesses of our own condition, and if we are mature, we may learn and grow and profit from the wisdom of the brothers who are called the opposition.”

6. “Every man of humane convictions must decide on the protest that best suits his convictions, but we must all protest.”

7. “We still have a choice today: nonviolent coexistence or violent co-annihilation. We must move past indecision to action.”

On peace and revolution

11. “With patient and firm determination we will press on until every valley of despair is exalted to new peaks of hope, until every mountain of pride and irrationality is made low by the levelling process of humility and compassion; until the rough places of injustice are transformed into a smooth plane of equality of opportunity; and until the crooked places of prejudice are transformed by the straightening process of bright-eyed wisdom.”

12. “We must concentrate not merely on the negative expulsion of war, but on the positive affirmation of peace.”

13. “The time has come for an all-out world war against poverty. The rich nations must use their vast resources of wealth to develop the underdeveloped, school the unschooled, and feed the unfed. Ultimately a great nation is a compassionate nation.”

14. “I believe that unarmed truth and unconditional love will have the final word in reality. This is why right temporarily defeated is stronger than evil triumphant.”

15. “A true revolution of values will lay hand on the world order and say of war, “This way of settling differences is not just.”

16. “Now let us begin. Now let us re-dedicate ourselves to the long and bitter, but beautiful, struggle for a new world.”