In 2017, President Trump signed an executive order banning people from six Muslim-majority countries from entering the USA, and slamming the door on refugees. After being temporarily stopped multiple times, the US Supreme Court overturned a block on the devastating ban in June.

The order demonises the vulnerable – those who have fled torturers, warlords and dictators – and those who simply want to be with their families. It is essentially a licence to discriminate, disguised as a 'national security measure'.

Since it was announced earlier in the year, over 31,000 of you joined us in resisting the discriminatory refugee and Muslim ban by asking President Trump to put an end to it.

How did we get here?

The ban was cruel, inhumane, and violated international law.

With the stroke of a pen, the President banned Syrian refugees from the USA indefinitely and prevented anyone (including refugees) from Iran, Iraq, Libya, Somalia, Sudan, Syria and Yemen from entering the USA for 90 days.

He also halted the US refugee resettlement programme for 120 days, and indicated that when this restarts the US will slash the maximum number of refugees it will receive from 110,000 to 50,000.

These countries all have one thing in common: most people seeking asylum from these countries are trying to escape serious human rights abuses like torture and mass murder. For most, returning home is not a choice.

We won the battle

On 9 February, a US appeals court rejected President Trump's attempt to reinstate his ban after a federal judge issued a temporary restraining order that temporarily halted the ban. 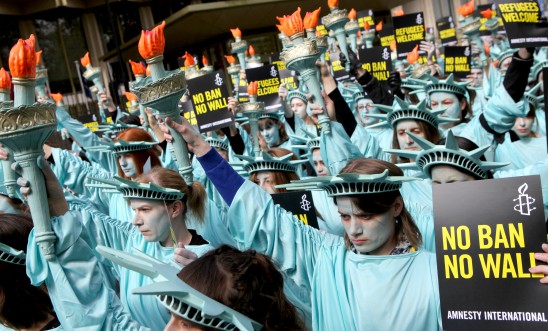 The latest ruling meant that people from Iran, Iraq, Libya, Somalia, Sudan, Syria and Yemen with visas can continue to enter the US. And refugees who were also subject to the ban are no longer blocked either.

Soon after the appeal ruling, senior White House adviser Stephen Miller denounced the federal judges who stopped President Trump’s controversial travel ban, warning that the world will soon see that the president’s executive powers ‘will not be questioned’.

This 'revised' order is the same hate and fear with new packaging. Once again, people from certain Muslim-majority countries will face unnecessary and discriminatory obstacles to seeing their families. This time the Trump administration has taken it upon themselves to define what a 'close' family tie is, which will decide who can and cannot enter the US. This means that grandparents, cousins and others will be kept away from their loved ones.

But it gets worse. The State Department has also said that refugees being resettled may also be banned. The same vulnerable refugees who are fleeing horrific violence, who are just trying to rebuild their lives – and who are not a threat to national security.

No amount of editing can make this executive order anything but what it is – blatant bigotry.

It affects us all

The wave of anti-women, anti-Muslim, anti-refugee legislation coming from the Trump administration is an attack on all of us. The rollback of human rights anywhere is a risk to human rights everywhere.

The US is setting a dangerous precedent – one that other leaders may be inspired to follow.

We cannot let this happen.

'Continuing to close U.S. borders to people attempting to flee violence – whether from Syria or Honduras – will only intensify human rights crises all over the world. It is inhumane, short-sighted and against all of our shared values.' – Margaret Huang, Executive Director of Amnesty International USA

It is time to call on the President to stop abusing his power, to uphold the US’s commitments to the world’s most vulnerable refugees and to end the discriminatory travel ban.