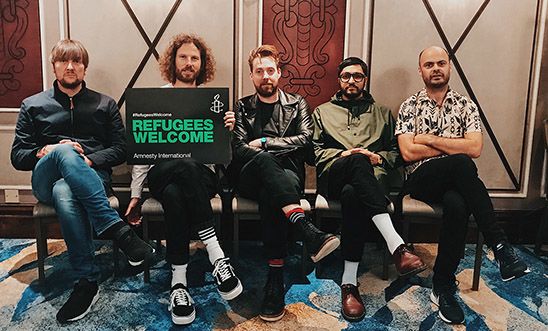 "We need to stand up for people under threat whoever and wherever they are."
— Kaiser Chiefs

Formed in Leeds in 2000, Kaiser Chiefs are one of the leading bands of their generation. The band have had a string of anthemic hits such as ‘Coming Home, ‘Oh My God’, ‘I Predict A Riot’, ‘Everyday I Love You Less And Less’, ‘Ruby’, ‘Never Miss A Beat’ and their latest single ‘Hole In My Soul’. Their reputation of being Britain’s best live band has led to many headline festival slots and sell-out tours.

At the end of 2016 the group released their sixth album STAY TOGETHER produced by Xenomania’s Brian Higgins which became their 5th top five album. The band have just have completed a hugely successful UK arena tour.

We have worked with Kaiser Chiefs on many projects, including a short film about human rights, which was shown by them on tour.