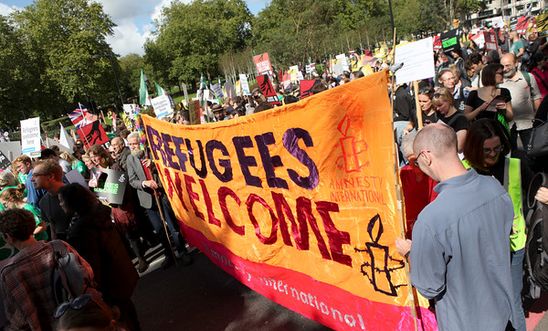 Actors, musicians and refugees will join a march through central London on Saturday (17 September) to protest against the government’s mishandling of the refugee crisis, which has contributed to the misery of thousands of people fleeing conflict and persecution who are now stranded across Europe and the world.

Actors Juliet Stevenson, Vanessa Redgrave and George MacKay - currently starring in Captain Fantastic, and Kaiser Chiefs’ Simon Rix will be among thousands of Londoners and people from across the country marching in the capital to urge Prime Minister Theresa May to resettle more refugees in the UK. Lord Alf Dubs, Green Party MP Caroline Lucas, Hassan Akhad - a Syrian refugee who appeared in the BBC Exodus documentary - and Baroness Sheehan will address the demonstration in Parliament Square.

For those who can’t make it to the march, Amnesty has printed placards with 1000 slogans sent in from across the UK and as far afield as Djibouti, Canada, Pakistan, Mexico and China. Messages include “May, May! Let them in today!”, “Longer tables, not higher walls” and “I exist because the UK gave my mother sanctuary. We must never stop doing this”. These will be handed out at stations near the start of the march. Amnesty will be live streaming parts of the day on its Facebook page, including interviews with celebrities, refugees, activists and volunteers.

The demonstration comes two days before world leaders meet in New York to discuss the international community’s response to the global refugee crisis. A year ago this week and after a public outcry following the death of toddler Alan Kurdi, David Cameron announced the UK would take in 20,000 Syrian refugees over five years from camps on the conflict-ridden country’s borders. While this marked a significant improvement on the UK’s response up until that point, it was far too small a number compared with the scale of the crisis. The Syrian conflict alone has created 5 million refugees.

According to the UN’s refugee agency, so far this year 300,000 people have crossed the Mediterranean to Europe and over 3,200 have died or gone missing, and tens of thousands are stranded in Greece in appalling living conditions.

Amnesty is calling on governments, particularly from wealthier countries, to commit to resettling significantly more refugees and to provide other legal ways to find safety.

“While the government’s failure of leadership on the refugee crisis has been utterly shocking, local communities have taken matters into their own hands and have been doing what they can to support refugees. Some have campaigned for their councils to take in refugees and held fundraising events or run English classes. Others have been driving supplies over to Calais or heading out to volunteer in refugee camps in Greece.

“This march is to show that actually ordinary people in Britain care deeply about refugees. Many of those seeking sanctuary have seen their families torn apart and homes destroyed. As one of the richest countries in the world, our government can and must do more to help.”

“As a refugee I know how important it is for countries to welcome and offer sanctuary to people fleeing violence and persecution. If it wasn’t for the UK granting asylum to my family after it got too dangerous for us to stay in Afghanistan, I might not be here today. We’re in the middle of a massive refugee crisis and I would like to see UK politicians commit to throwing the same lifeline to far more people who need it.“

“It’s wonderful that so many people across the country have been rolling up their sleeves to support refugees and I’m delighted that thousands will be joining the march. The UK is one of the richest countries in the world and the government can and should be doing more to help. We’re talking about a vast humanitarian emergency and until world leaders agree to share responsibility for refugees and provide safe and legal routes, people fleeing conflict and persecution will be forced into taking ever more dangerous journeys to safety. I hope Theresa May is listening.”

“The refugee crisis is a global disaster. Thousands of people just like you and me are fleeing war and persecution with nowhere to call home, nowhere to go next and nothing to go back to. I am marching on Saturday to show my support for #refugeeswelcome and to ask the Government to do more to help.”

Amnesty will be meeting near the front of the march at Achilles Way at the top of Park Lane at 12.30. The march will begin at 1.30 heading towards Parliament Square, where there will be a rally from 3pm-5pm. Placards will be handed out at Green Park and Hyde Park stations and be available near the meeting point.

Amnesty this week launched a new campaign called ‘I Welcome’ calling on the international community to share responsibility for the global refugee crisis. As well as the crisis in Europe, in recent months Kenya has said it plans to close the world’s largest refugee camp, Dadaab, forcing hundreds of thousands of Somali refugees back to a country with an active armed conflict. Pakistan is threatening to expel 1.5m Afghan refugees. Australia is responsible for refugees being detained in overcrowded and dangerous conditions. Meanwhile, on the Syria-Jordan border, 75,000 refugees have been trapped in desperate conditions since Jordan closed the border in June.