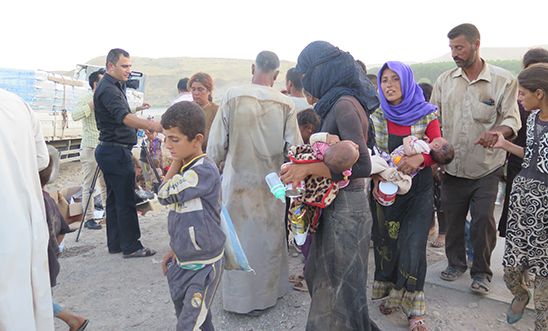 ‘Some could not move and could not save themselves; they lay there in agony waiting to die. They died a horrible death. I managed to drag myself away and was saved by a Muslim neighbour; he risked his life to save me.’
Salem, survivor of the Kocho massacre who managed to hide near the site for 12 days

The Islamic State armed group (ISIS) is committing crimes against humanity on a historic scale in northern Iraq. Entire communities are at risk  of being wiped off the map of Iraq.

We interviewed hundreds of witnesses, survivors, and victims, including the families of those who were killed or abducted, and many others displaced by the violence of the Islamic State in our new report, Ethnic cleansing on historic scale: the Islamic State’s systematic targeting of minorities in northern Iraq.

Two of the deadliest incidents occurred when Islamic State fighters raided the villages of Qiniyeh on 3 August and Kocho on 15 August, with hundreds killed in these two villages alone.

Rounded up and shot

Survivors have told us terrifying accounts of how dozens of men and boys as young as 12 were rounded up by Islamic State fighters, taken to the outskirts of the villages and shot dead.

‘They marched us men and boys towards the mountain, about 15 minutes’ walk away. We stopped at a place where there was a big hole, by the wadi (valley); we were on the edge of the hole,’ described Fawas Safel ‘Ammo – one of the survivors of the Qiniyeh killings.

‘They opened fire and some tried to run away. I let myself fall in the hole, and others fell on top of me. I stayed still. After the continuous fire stopped, IS militants fired individual shots, at those they saw were not yet dead.

‘After they left – I don’t know how much time passed exactly – I got up and so did my friend Ezzedin Amin and we ran away.’

Waiting in agony to die

Another survivor, Salem, who managed to hide near the Kocho massacre site, described to us the horror of hearing others who had been injured crying out in pain:

‘Some could not move and could not save themselves; they lay there in agony waiting to die. They died a horrible death. I managed to drag myself away and was saved by a Muslim neighbour; he risked his life to save me.

‘For 12 days he brought me food and water every night. I could not walk and had no hope of getting away and it was becoming increasingly dangerous for him to continue to keep me there.’

Salem was later able to escape by donkey to the mountains and then on into the areas controlled by the Kurdistan Regional Government.

A tragedy of historic proportions

The mass killings and abductions have succeeded in terrorising the entire population in northern Iraq, leading to thousands fleeing in fear for their lives and scores of families torn apart.

‘The Islamic State is carrying out despicable crimes and has transformed rural areas of Sinjar into blood-soaked killing fields in its brutal campaign to obliterate all trace of non-Arabs and non-Sunni Muslims.’
Donatella Rovera, Amnesty’s Senior Crisis Response Adviser, currently in northern Iraq

Several hundred women and children who were abducted from Kocho on 15 August are currently being held in Tal Afar, where militants are holding other Yezidi captives.

But the fate of hundreds – possibly thousands – of Yezidis abducted by the Islamic State remains unknown.

#Iraq She is 3 & was abducted by ISIS with her mother & baby sister & 35 other women & children, her uncle told me pic.twitter.com/cAA3CrCEeq