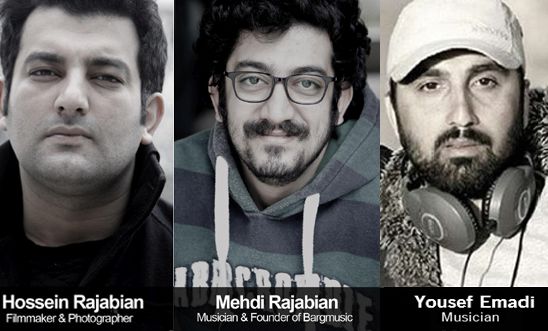 Hossein Rajabian, the filmmaker, his musician brother Mehdi Rajabian and their friend and musician, Yousef Emadi were sentenced to imprisonment after a three-minute trial just for expressing themselves peacefully through their art.

The back story: forced to 'confess'

In October 2013 Hossein Rajabian was working at the office he shared with his brother Mehdi and Yousef Emadi when Revolutionary Guards officials arrived. They tasered, blindfolded and arrested the men, and took them to a secret location.

The men were held there for 18 days. They were beaten, given electric shocks and we think they were tortured in other ways too.

For the next two months they were held in solitary confinement in Evin prison, where interrogators forced them to record televised confessions – or face life imprisonment.
Three-minute trial

In April 2015 they were convicted in a three-minute trial on charges including ‘insulting Islamic sanctities’, ‘spreading propaganda against the system’ and ‘illegal audio-visual activities’ and each sentenced to six years imprisonment. All because of their artistic activities.

One of Hossein’s great crimes was producing a documentary exploring women’s right to divorce in Iran. His brother and Yousef had committed the grave offence of distributing music not pre-approved by the authorities.
Appeal denied

They appealed their sentences but it was denied. They have had no access to a lawyer at any stage of their arrest, detention, trial or appeal.

Both Hossein and Mehdi Rajabian began serving their three-year prison terms on 4 June. Mehdi Rajabian was transferred to hospital on Monday 20 June because of his MS (multiple sclerosis), but has since been taken back to Evin Prison.  We don’t have any updates about Yousef Emadi.

They are prisoners of conscience and Iranian authorities must drop these torture-tainted convictions, and respect freedom of expression.