Human rights defenders – some of the bravest people in the world 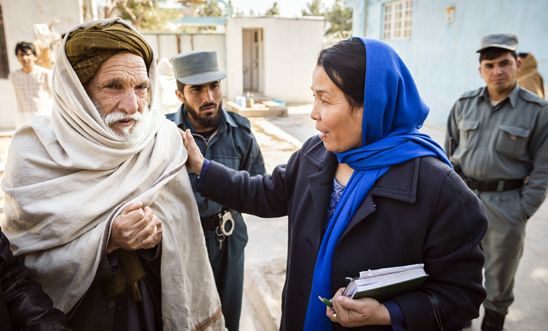 Sherifa Shahab, a Police Ombusdman and human rights defender in Afghanistan, with the father of a detainee in police custody © Marcus Perkins for Amnesty International

Human rights defenders are people who champion and fight for human rights of other people. They challenge brutality, oppression and injustice in every part of the world, often risking their lives to expose abuses and hold powerful people to account, while supporting the survivors of human rights abuses.

They are invaluable in creating a world where all of our human rights are respected -  their efforts benefit all of us.

Who are human rights defenders?

Human rights defenders are defined foremost by their efforts to stop human rights abuses and make sure that everyone has access to their universal rights.

They come from all walks of life. A defender's human rights work might fulfilled through their job - they could be a community worker, teacher, lawyer, journalist or activist working for human rights change. Equally, they may defend human rights in a voluntary capacity, separate to their profession.

There is no one ‘type’ of human rights defender. What they have in common is that they do their utmost to make sure that human rights are upheld in the environment in which they work.

What do they do?

Defenders work in many different ways to protect human rights. They may operate at community level, at a national or even international level.

The term 'human rights defender' is diverse and encompasses a broad range of people who carry out many different activities. A defender might:

These are only some of the ways in which someone could fulfil their role as a human rights defender. In reality, their work could include many or none of the above examples.

Though their means of defending human rights takes many forms, the work of human rights defenders and their commitment to universal rights benefits all of us.

The sensitive nature of their work means that human rights defenders and people close to them, like their families, can be targeted by all kinds of abuse, often from groups or individuals who want to stop their human rights activities.

Governments, security forces, businesses, armed groups and even members of their own community might try to stop defenders from carrying out their work, if they feel like their power or authority is compromised or reputation called into question.

HRDs can face all kinds of risks – from campaigns of intimidation and misinformation, to fabricated criminal charges, forced disappearance, imprisonment, torture and murder.

Women human rights defenders can face additional risks and pressures; violations targeted at women may take a particularly gendered form, such as sexual violence. Simply the act of a woman speaking out can be seen as defying social norms so they may also face pressure from their own families and communities.

Human rights defenders are specifically protected under international human rights laws, and sometimes under regional and state laws too.

The Declaration also acknowledges the huge risks that defenders face. It outlines the collective responsibility of all states in the UN to ensure that defenders are supported in their work and protected from harm.

The Declaration states that defenders have a right to:

A Special Representative of the Secretary General on Human Rights Defenders was appointed in 2000 to oversee the implementation of the Declaration; assess the situation of human rights defenders through country visits; and receive information from defenders including details of obstacles to their human rights work and threats made against them.

Although the Declaration itself is not legally binding, several states have in recent years adopted laws explicitly protecting defenders, and established their own national protection programmes.

Some regional mechanisms have also been established to provide support for defenders.

In North and South America the Inter-American Commission on Human Rights established a special unit to protect defenders in 2001.