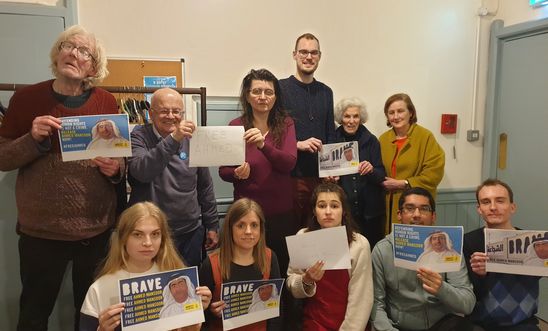 Welcome to the Westminster and Bayswater AI Group

We meet third Tuesday* of every month in St Peter's Church & would love to welcome new members!

Should you wish to join our group or for general information please contact our secretary Simone Theiss.

We hope to see you at our meeting or event soon.

* Please confirm with our secretary.

We meet within 10 minutes walk of Victoria station in St. Peters Church, 119 Eaton Square, London SW1W 9AL in a relaxed atmosphere - which often includes snacks and tea or coffee, sometimes wine. New members are sent detailed instructions on how to get to the meetings. We hope they are also made to feel very welcome.

Our group specialises on several regions and we are open to suggestions for new campaigns from current and new members.

The group currently subscribes to the following campaigns

The group decided to adopt Ahmed Mansoor (UAE) as prisoner of conscience and to work on his case. We also took on the case file of the Saudi Women Rights Defenders as a case file. .

The Group was originally set up in 1976 by Father Reginald Fuller, a priest at Westminster Cathedral who had lived in Africa and witnessed human rights abuses - people being dragged off in the night -  which continued to haunt him.
He told us the story himself.  He had a reputation among his fellow priests at the Cathedral for being loquacious at their communal dinners. One evening, he ended a rather long monologue on the regrettable state of human rights in the world with the lament: "It's a pity we don't have a group of Amnesty International here."  Cardinal Basil Hume immediately chipped in: "Why don't you start one?" Within a week, Fr Fuller had called a public meeting attended by more than forty people, and so the Westminster Cathedral Group of Amnesty International was born.

We used to meet in the library of the Cathedral around a large oval shaped mahogany table with the Chairman seated on a kind of throne at one end. When the group became established, Fr Fuller dropped into the background as he had always intended to do. He was much amused that one of our early and very successful fund raisers was a Real Ale party with the beer being supplied free by his family's business, Fuller's Brewery.He kept in touch with the group and was pleased to hear of every success.  He didn't do too badly himself either, living to be well over a hundred.

Within a few years the group decided  to widen our appeal by dropping the Cathedral from our name and meeting elsewhere.

As with many Amnesty Groups,  we met in people's houses and flats, in pub rooms and church halls.  We had our ups and downs. We were very lucky to have Edward Levy, a 1939 child refugee from Germany, among our members.
Edward, who was involved with the start of Amnesty in 1961, was our chairman for many years.  He brought his good friend Peter Benenson, founder of the movement to meet us.  It was Edward's charismatic presence that inspired the group and built up a vital core of support.  We wrote letters, sent cards, went on demos and protest marches. One of our earliest campaigns was for Vietnamese prisoner of conscience Pham Van Hat.  When he was released he wrote movingly thanking us for all we had done.

The group has always attracted members from different parts of London rather than confining itself to the local area. Many joined because Westminster and surrounding areas was their place of work rather than where they lived. It has never had very large numbers and always relied on a loyal and hard-working group of core members. In recent times there have been more younger people coming to our meetings and we are hoping to join the select band of active and strong central London groups working closely with the London region of Amnesty.

Back to Westminster & Bayswater