North Africa – Karen mentioned that the Inspiring Women’s Network which meets at the Baptist church are having a series of events and showed a film on migrants in January. It may be possible to get their support re Azza Soliman – need to liaise with Hetty on this.

Israel and the Occupied Palestinian Territories: Chris had sent the IOPT newsletter which will also go out with these minutes, and two letters to sign. The newsletter is pasted below.

Social Media – Karen reported on two actions on twitter on Yemen, and the countdown to Shawkan’s release.

The pub quiz has been postponed until a later date.

The Regional Conference in Exeter will be on Sat 11 May.

DESTINATION OCCUPATION (Tourism and the illegal settlements) – ‘Online booking giants Airbnb, Booking.com, Expedia and TripAdvisor are fuelling human rights violations against Palestinians by listing hundreds of rooms and activities in Israeli settlements on occupied Palestinian land, including East Jerusalem, Amnesty International said today. In a new report, ‘Destination: Occupation’, the organization documents how online booking companies are driving tourism to illegal Israeli settlements and contributing to their existence and expansion’.

This is the introduction in the Amnesty press release sent out 30th January to launch the Destination Occupation campaign mentioned in previous Newsletters. 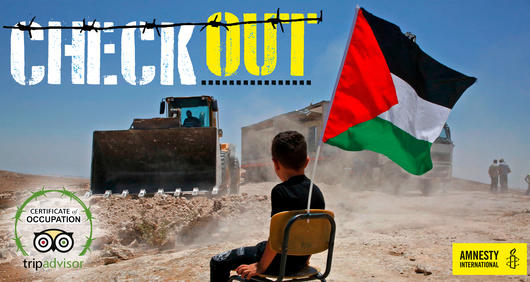 Materials include the press release (available on request), the report (available here -  https://www.amnesty.org/en/documents/mde15/9490/2019/en/ ), a Q and A (attached), a parody tourism video on YOUTUBE and a petition at :

This is a developing campaign, so more Actions and materials will follow. Do publicise widely and encourage members to contact the companies.

Sheikh Sayyah Abu Mdeighim al-Turi (Bedouin leader) - On 25 December 2018, Sheikh Sayyah began to serve a 10-month sentence for his role in building structures in his village. Sheikh Sayyah is a prominent leader of the non-violent struggle for Bedouins’ rights, as well as the head of the Bedouin village of al-‘Araqib in the Negev/Naqab in southern Israel which the Israeli government considers illegal.

We urge you all to take action and to call on the Israeli President to immediately and unconditionally release Sheikh Sayyah as he is a prisoner of conscience and is imprisoned solely for peacefully defending his human rights and those of his community.

Suha Jbara (Palestinian social justice activist) - On 9 January 2019, Suha Jbara was released after spending over two months in detention where she says she was tortured by interrogators. She spent over 26 days on hunger strike in protest against her treatment by security forces and prosecutors.

Suha Jbara (pictured) still has not been read her charges in court and her upcoming hearing is scheduled for 30 January. She is at risk of being charged based on information obtained under torture, although the prosecutor’s office has not provided any credible evidence against her.

On 13 December 2018, the Palestinian Attorney General’s office concluded a brief investigation into her allegations of torture without finding any wrongdoing. Amnesty International believes the investigation was not independent, impartial, or thorough and was very limited in scope.

We encourage you all to help us take action and to call on Palestinian Prime Minister Rami Hamadallah to act in accordance with Palestine’s international human rights obligations and order a prompt, impartial, independent and effective investigation into Suha Jbara’s allegations of torture and other ill-treatment in Jericho Detention and Interrogation Centre.

11.1.19 – (Non-AI) Israeli sniper kills Gaza woman in first fatality of 2019 - A woman shot during protests in the occupied Gaza Strip on Friday 11th, is the first Palestinian fatality at the hands of Israeli occupation forces in 2019. A Palestinian man was shot and seriously wounded by Israeli forces in the West Bank the same day.

Amal al-Taramsi, 44, died after she was shot in the head by live fire during Great March of Return protests east of Gaza City. She was 200 meters away from the boundary fence at the time of her injury, according to the Gaza-based human rights group Al Mezan.

Al-Taramsi is the third female to be killed during the protest series that was launched on 30 March last year. The other two female fatalities were medic Razan al-Najjar and 14-year-old Wesal al-Sheikh Khalil. (Full story from header).

15.1.19 – (Non-AI) A village under occupation - For the residents of Issawiyeh, a Palestinian village of some 20,000, surveillance, military raids and building demolitions are a daily reality.

Nestled in the hills of East Jerusalem, the village is plagued by poor infrastructure, residents are constantly harassed by the Israeli Border Police and anyone, including children, run the risk of arbitrary arrest.

The village has seen its lands gradually disappear. Before Israel occupied the area in 1967, the village included some 12,500 dunams (1 dunam = 1,000 square meters) of land. (Photo : Youths clean supplies salvaged from a pizzeria where they used to work. The building was demolished on 1 May 2018).

Since then, and due to a combination of Israeli settlements, illegal under international law, the nearby Hebrew University and, more recently, Israel’s West Bank wall, village land has been reduced to around 9,400 dunams, according to Muhammad Abu al-Hummus, a local council member. (Full story from header).

Hamdi Naasan, a 38-year-old father of four, succumbed to his wounds on  Saturday after Israeli settlers from the nearby illegal outpost of Adei Ad shot at the Palestinian villagers. (Picture : relatives of Hamdi Nassan, killed in the settler attack).

Rupert Colville, spokesman for the UN office for the high commissioner for human rights (OHCHR), issued a statement on Tuesday, where he said a group of up to 30 Israelis - some of them armed - attacked Palestinian farmers in their fields and then descended on the village where they used live ammunition to shoot at the villagers and their houses.

Six Palestinians were shot and wounded with three of them in a serious condition. It remains unclear whether any settlers were also injured.

Colville noted that Israeli security forces were stationed near the village and were immediately alerted to the attack, but witnesses said that it took around two hours for them to intervene. (Full story at :

22.3.19 - World Water Day. A ‘hook’ for publicity / events on the inequality of water distribution in the Occupied Palestinian Territories. (Contact Country Coordinator for information).

Bat Shalom - is a feminist grassroots organization of Jewish and Palestinian Israeli women working together towards peace, a just resolution to the Israeli-Palestinian conflict, respect for human rights, and an equal voice for Jewish and Arab women within Israeli society. Bat Shalom recognizes the right to self-determination of both Israelis and Palestinians though the establishment of a Palestinian state alongside Israel on the 1967 boundaries, with the whole city of Jerusalem constituting two capitals for two states.