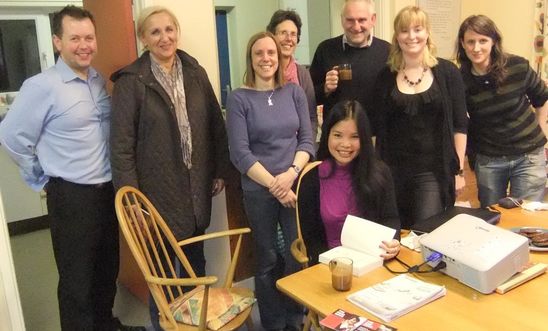 For our One World Week meeting this year we were privileged to have Zoya Phan come to speak. Zoya is Campaigns Manager at Burrma Campaign UK, and author of "Little Daughter".

She spoke very movingly about her own experiences as a Karen refugee, and also gave us a very well-informed insight into the current political and human rights situation in Burma. Despite some recent encouraging signs of change in Burma, she urged us to continue to take action, as the danger is that the international community may become complacent and cease putting the necessary pressure on the Burmese regime to build on the first small steps to reform.

Aung San Suu Kyi and hundreds of political prisoners have been released, and Aung San Suu Kyi's party, the National League for Democracy, has won seats in parliament. However, despite these welcome changes, there is still a very long way to go to get the real democratic reforms Burma's people want. Hundreds of political prisoners remain in jail, kept in inhumane conditions, and the government of Burma officially denies there are any political prisoners. There has also been an increase in human rights abuses in Burma. The Burmese army has been committing horrific human rights abuses against civilians in Kachin State, including an increase in the use of rape, gang-rape and sexual violence against ethnic women.

How can we take action?