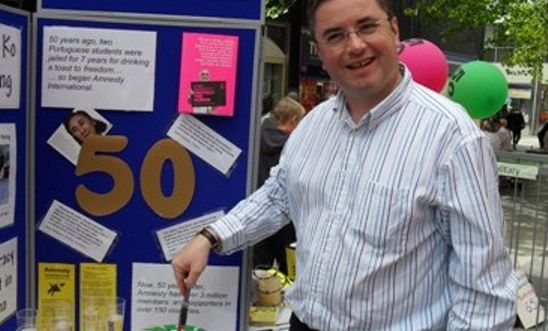 Swindon Amnesty group took to the streets to celebrate the 50th birthday of Amnesty International. Busy shoppers in Swindon town centre were stopped in their tracks by the sight of a “prisoner” in a cage. Members of the group took it in turns to sit in the cage wearing a mask of our adopted prisoner of conscience. Min Ko Naing was sentenced to 65 years in prison in 2008 for his part in the peaceful protests of 2007. There was very positive interest from passers-by, some of whom had been previously unaware of these sorts of human rights abuses. Seventy-five postcards to the Burmese authorities were signed, asking for the release of Min Ko Naing.
A highlight of the day was the arrival of South Swindon’s MP, Robert Buckland, who cut the 50th birthday cake. Members and supporters of the group joined in a “Toast to Freedom”, echoing the event that sparked the founding of Amnesty in 1961. The messages of hope left on the 50th anniversary message board reflected the vision of Amnesty – for a world in which all human rights are respected and groups such as Amnesty are no longer needed.