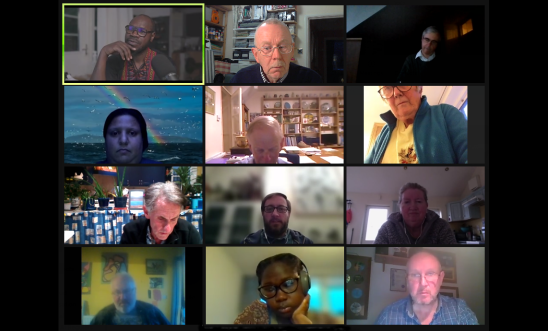 We were delighted to have Kolbassia Haoussou join us at our May group meeting. Kolbassia has worked at Freedom from Torture (FFT) since 2009. In 2007 he co-founded the Survivors Speak OUT network (SSO), a national network of torture survivors and former clients of Freedom from Torture who draw on their experience of torture and seeking protection through asylum, to influence decision-makers and raise public awareness of the challenges facing survivors trying to rebuild their lives in the UK. Kolbassia has addressed the United Nations General Assembly in New York and the Human Rights Council of the United Nations in Geneva. Alongside ambassadors Angelina Jolie and William Hague he has led calls for improved international frameworks to eradicate torture. He believes Survivors have the experience and understanding of torture and campaigned for their greater involvement in evidence-based decision making. He was awarded an MBE in the 2020 New Year Honours List.

Kolbassia started by saying he had the highest respect for Amnesty. Individuals in difficulty are supported enormously by organisations such as Amnesty and FFT, enabling them to stand when otherwise they might fall.

Kolbassia left Chad in 2004 after escaping from a period of military detention. His troubles began when he started to give extra classes to support schooling with the aim of giving children a better chance of getting a degree and improving their 'life chances'. Although still a teenager this established him as a leader of the community and, as his reputation spread he was invited to help in neighbouring communities.

As elections approached he was invited to participate but declined on the grounds his role was small. This met with hostility from the appropriate powers whose response was suggestive of the view that 'He who is not with us, is against us'. He was interrogated and subjected to torture, being asked questions to which he simply didn't know the answer. Eventually he managed to escape and having had a difficult childhood and five years in a refugee camp believed he had never felt better.

He still needed to get as far away as possible from villages and animals, feeding on 'market leftovers' when he could and resting only when possible. His objective was to put two or three countries between himself and Chad. He also had very little money.

Kolbassia described what followed as a miracle. Using his 'last 50p' he purchased a lottery ticket using the number '49' and won the equivalent in 2004 of £3,500. This enabled him to get a French passport which 'looked legal'. He managed to find a ship that would take him and in spite of his fear found himself well-treated on board. After a month he ended up in London and was 'left' at the Home Office.

Kolbassia was put in an Immigration Detention Centre to be deported. He remained there for three days and three nights, which he described as the worst days of his life. Having rejected the lawyer given to him on the grounds of lack of trust he had another enormous slice of luck. He encountered a sympathetic Home Office official who understood his situation and referred him on to Freedom from Torture.

Kolbassia believed this chain of events had a purpose: for him to speak out and help others subject to torture, sexual violence and abuse. He co-founded SSO and now leads a department.

In 2015 he was able to return to Chad and, because of his reputation and profile, avoided arrest. For security, the Foreign Office and Amnesty were kept aware of his movements.

Kolbassia said that SSO comprised about 35 individuals with various levels of engagement (sometimes influenced by their circumstances). It continues to work to give a voice to and improve the lives of those exposed to torture, exploitation and abuse and encourage Survivors to speak out.

Our chair and our UAE case worker updated us on the meeting they had attended with Paul Dawson (acting country co-ordinator for UAE) and other groups including Liverpool, Manchester, Reading, St Albans and Westminster & Bayswater. After that meeting it had been clarified that Dr al-Roken's release date was intended to be 17 July 2022. However there was concern that, as with others of the 'UAE 94' (the group subject to spurious charges, many of whom were simply peacefully advocating human rights and of whom about 60 remain in prison), their detention would continue beyond the end-date of their sentence.

The Sutton group is continuing with its campaign of 100 emails and letters to the UAE embassy on behalf of Dr al-Roken. This is scheduled to complete in June.

We also noted a number of items of good news relating to cases we had written on recently including:

The following were confirmed in their roles and thanked by the Group: