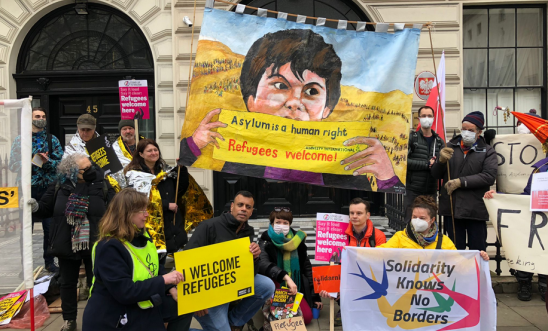 Across the UK in London, Manchester, Brighton, Newcastle, Carlisle, Worcester, Glasgow, Edinburgh, Cornwall as well as in Ireland, Germany, Denmark and Poland, Amnesty Activists and supporters held vigils and protests outside Polish Embassies, Consulates and Public Spaces to call for an end to the suffering of refugees and migrants trapped in the freezing forests at the border between Belarus and Poland.

Why did they demonstrate?

A shocking humanitarian crisis at the borders of the EU and Belarus is continuing to cause immense suffering to asylum seekers and other migrants, including families with small children, and has led to the death of at least 10 people. Thousands of people - including many fleeing war and conflict-are trapped in the swampy forests along the borders of Belarus and Poland, freezing in sub-zero temperatures, hungry, thirsty and suffering violent pushbacks from both Belarussian soldiers and Polish border guards.

People at the border find themselves between a rock and a hard place. Stranded in what is effectively an exclusion zone they face hunger, freezing temperatures and shocking levels of brutality from Belarussian forces as well as violent pushbacks from Polish forces, including forcing people to cross a fast flowing river.

Among them are pregnant women, families with small children, and people who are elderly and injured. Many have fled war and persecution in Syria, Yemen, Afghanistan and Iraq. In the absence of safe and legal routes they felt they had no other alternatives to reach safety.

Under EU and International law, everyone seeking asylum at the borders has the right to make an asylum application, which must be processed and considered individually.

NGO’s and Humanitarian organisations must be allowed to reach and deliver life-saving aid to those trapped between the borders.    End the suffering !

Amnesty is calling for asylum seekers and migrants trapped at the border to be evacuated to EU countries where their protection needs should be fairly assessed.

Please write personal letters to the Embassy of Poland:

His Excellency the Ambassador of the Republic of Poland to the UK
Mr Arkady Rzegocki
47 Portland Place, London W1B1JH