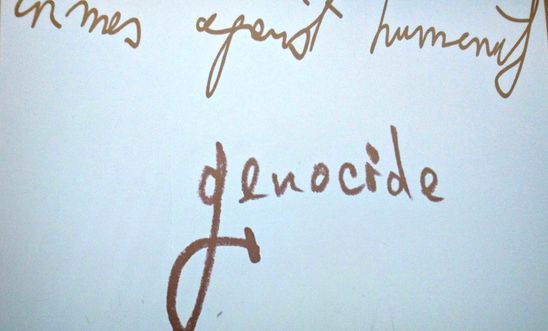 The 6th Annual Human Rights Lecture at the University of Southampton took place on 10th January.  It was organised jointly by the Southampton City Group, and the School of Law and the Faculty of Humanities at the University.  The speaker was Philippe Sands QC.  The lecture was a very thoughtful and personal journey into the legal and philosophical background to the Nuremberg trial and the origin of the terms "crimes against humanity" and "genocide".  It was particularly poignant to see these words in the handwriting of the two lawyers who first proposed them,  Hersch Lauterpacht for the first and Raphael Lemkin for the second (see photo).
Nearly 400 people attended the lecture.  Each were given a small flier about Nazanin Zaghari-Ratcliffe and asked to go online and take part in the Amnesty action to support her.  Donations at the end of the lecture totalled £184.62.

Philippe Sands is Professor of Law and Director of the Centre on International Courts and Tribunals at University College, London.  He is the author of sixteen books on international law and his most recent publication "East West Street" has recently been awarded the 2016 Baille Gifford (Samuel Johnson) Prize.