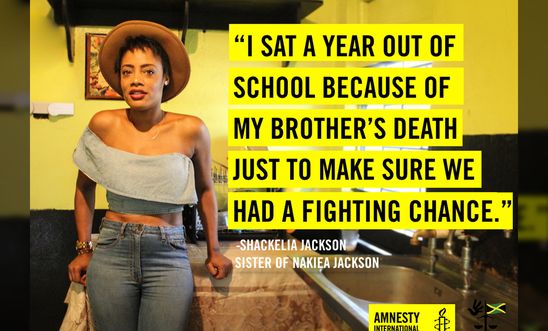 Please read this amazing message from Shackelia Jackson - we worked on her case so much last year, it's wonderful to see her message to Amnesty.

Crafting the perfect response took longer than I anticipated and so I resigned myself to writing from the heart.

I spent the last 3 years speaking as a broken sister; ensuring that others wouldn’t forget. I later saw the evolution of that role; the doors it opened for others; but also the threats it posed for me.

The death of my brother Nakiea Jackson and my subsequent actions, made me synonymous with a struggle that was bigger than Nakiea; one in which, stopping became difficult.

However, the magnitude of that fight and the arduous road ahead was not traversable individually; and this is where you guys, Amnesty International and its allies come in.

You are a manifestation of the global support I needed, to rewrite a history of wrong and I am thankful that Nakiea’s story resonated sufficiently with you; allowing me to become the beneficiary of your support; commitment and hospitality. You have made the journey manageable, broadened our platform and provided the strategic guidance and web of support required in this change process.

Nakiea became a global symbol for the universal language of death; the need for change and the value of the international community; its sustained pressure and presence.

You gave me not only a safe space and the shoulder of giants to stand on; but also an outlet to redefine the optics and manufactured perception of Jamaica and our leadership. The decision makers no longer controlled the narrative and we were disrupting the nostalgia they exported.

You gave me a source of hope; to live again, to dream again; my innocence was vicariously rekindled - through the observation and confidence the communities I have interacted with express in their security forces. You made it ok to aspire for that in Jamaica.

You are the real heroes and your selflessness and dedication to the upholding of human rights and dignity around the world is mirrored in the support that your campaigns garner and the positive results you have yielded for those affected and victimized.

I could go on, but I am sure the essence of my gratitude has been expressed and so I say peace be with you, continue to be a beacon of change and a light unto our pathway. I am excited by the prospects of our sustained partnership for the best is yet to come.

All the best,
Shackelia
Broken, not destroyed