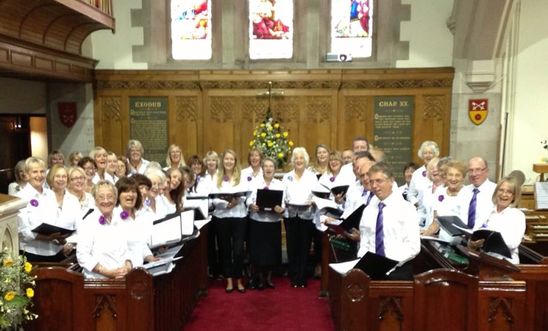 A warm autumn evening , a superb 60 strong choir and three talented young classic rock musicians, helped our group raise £591 for Amnesty in 2 hours, in an evening we entitled " Sing for Justice " .
It was the first time our group had organised a concert as a means of fundraising, and if the dancing between the pews and in the aisles was anything to go by , we can count it as a huge success . Helped by the generosity of the Poulton Peoples Choir and St Margaret's Church , St Annes , the outgoings were minimal, and the local Amnesty members gave generously to set up a very impressive table of raffle prizes .
Poulton Peoples Choir created a wonderfully rounded and balanced sound, in a programme that was fitting for the occasion . They sang a range of well known songs about freedom and justice and got the audience joining in some African rhythms and choruses  . In between the songs, a number of the local Amnesty members told a short tale about the work of Amnesty and the individuals who have been helped by Amnesty's work .  Their passion came across loud and clear .
After refreshments and a somewhat chaotic but hugely successful raffle  ,  " Montagu " took to the stage . These 3 young men had " stepped into the breach " at 24 hours notice after the booked band broke up, but we were thrilled . What a talented bunch of young men ! T Rex , Led Zepplin , Muse and John Lennon rang out in the church and everybody was on their feet !
The choir have some members who can dance as well as they can sing !
Thank you to everyone involved and here's hoping we can  do even better  next year .
View latest posts
0 comments