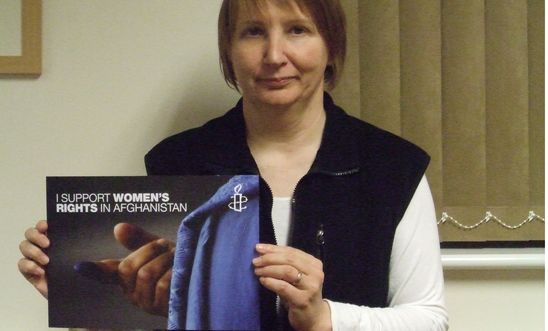 I was privileged to attend a skills sharing day in London on 9th March on the Amnesty campaign for women’s rights in Afghanistan. This campaign focuses on 4 key areas:

The day included a panel session with two informative and inspiring Afghan women:

The key messages I took from this excellent skills-sharing day were:

At the start of the day we celebrated the fact that Secretary of State for International Development Justine Greening had acknowledged that violence against women in Afghanistan is an issue her department needs to prioritise.  Amnesty is now campaigning to have that acknowledgement translated into concrete policies. To find out more about the Amnesty campaign and actions you can take, have a look at the AIUK website listed below.

As a group we are planning an awareness-raising campaign about this issue. Please get in touch with the group if you have any ideas for this or would like to help with our campaign. Many thanks - Karen Merritt