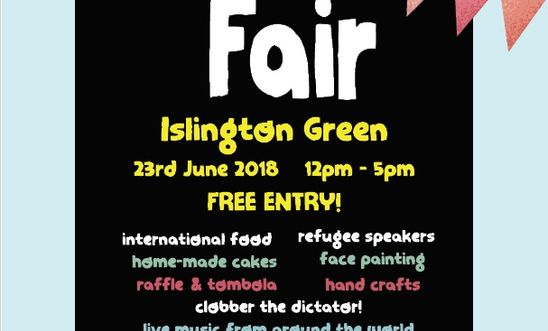 In addition to the stage performances there will:

The fair celebrates the contribution made by refugees to our communities with music and performances. The event has been organised by Islington and Hackney Amnesty Group to highlight the challenges facing asylum seekers in the UK as part of Amnesty Internationals I Welcome refugees campaign.

12.20 Speaker and MC: Comedian Sajeela Kershi. Sajeela has recently returned from Turkey where she was delivering aid to Syrian refugees.

2.40-2.50  Speaker: Rufin from Congo Brazzaville, now working as a teacher in London, supporter of Refugee Tales