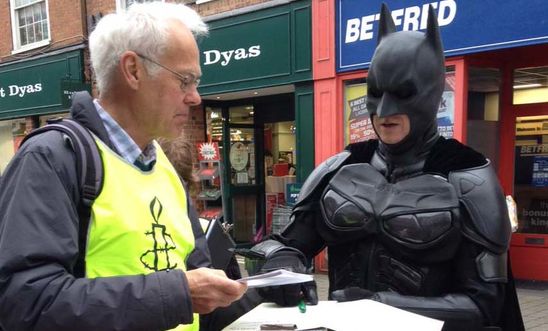 Our AGM at the beginning of the month gave us a chance to look back and reflect on what we had done during the last year.  And what a year it was!

We began with a small but determined group gathered in our new location, a small room at the Friends Meeting House.  Our aim was to intensify our efforts to free Eskinder Nega, involve ourselves in Amnesty's campaigns to stop torture and protect the Human Rights Act whilst continuing to raise funds.  We also wanted to raise our profile in Horsham.

It was agreed that we had done all that and more.  It was great to see such a crowd at the meeting which proved that the move we have now made from the small room to the large hall is absolutely necessary whilst also allowing us to use the projector for films and presentations.

In summary during the year we had several articles in the local newspaper notably one with the support of the staff themselves on World Press Freedom Day.  Our visit to the Ethiopian Embassy resulted in obtaining useful information on Eskinder's trial which has led to discussions with our MP and a presentation of Eskinder's case to an all party parliamentary group at Westminster.

Group members attended the South East Regional Conference, the National AGM and the conference to launch the Stop Torture campaign.  We gave talks to other groups, held an open evening and did our own research and presentations on Ethiopia. Before the election we contacted candidates to find out what their attitude was to the proposed changes to the human rights act and throughout the year we responded to actions wherever possible.

There was a Boot sale, an AmnesTea and a street collection but sadly the Christmas Charity Fair was cancelled because of the gale force winds.  Hopefully we will be there this year.

Despite the weather December saw us out in the centre of Horsham talking to the public about Write for Rights and collecting signatures and solidarity messages for Saudi Arabian lawyer, Waleed Abu al-Khair. The year ended with our Christams social where enjoyed using our creative "talents" making butterflies for the girls in Burkina Faso and took part in a photo action for Teodora in El Salvador.

We're certainly feeling positive about continuing our campaigning into 2016.