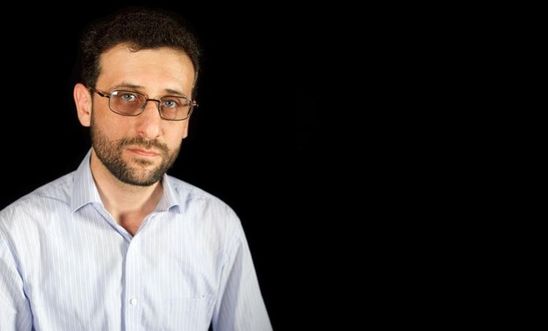 On Monday 5th March the Fylde Coast Amnesty Group hosted an open meeting to which members of the public were invited. It was very well attended by Amnesty members and friends and by students and teachers from AKS School. There were also members of the Muslim community there and several Syrian refugees.

This meeting was addressed by Dr Haytham Alhamwi, who was imprisoned by Bashar Al-Assad’s regime some years before the Syrian uprising. He has lived in Britain since coming to Manchester in 2007 to take a PhD in public health. Among those attending were representatives of the local Muslim community, and three Syrian refugees living in Blackpool.

Outlining the background to the present civil war, Dr Alhamwi said the Ba’ath Party had been in power since 1963. Shortly after taking control it declared a State of Emergency, under which the country continues to be ruled. The current president’s father, Hafiz Assad, had killed or imprisoned all his political opponents during his own period as president, He had ordered a massacre in 1982 which taught Syrians the dangers of questioning their government. Bashar Al-Assad succeeded at his father’s death in 2000 but continued the same policies.

Not long afterwards, Dr Alhamwi and some friends were detained and questioned by the secret police for setting up a free public library and launching anti-smoking and anti-corruption campaigns. These included the distribution of leaflets against bribery. In March, 2003, during a silent march against the invasion of Iraq, he, his father-in-law (an Imam) and 22 others were imprisoned in Damascus. He spent three months in a basement cell, where he was regularly beaten, before being sentenced to four years by a “Secret Field Military Court” – basically, a single judge, with no arrangements for an independent defence.

The first seven months were spent in solitary confinement in a filthy basement cell which, for the first month, had no light at all and contained nothing but two blankets, a plastic container and a hole in the ground for a toilet. It was so cold during the winter that he had to wear underwear on his head and a spare pair of socks on his hands to keep warm. He was beaten several times. Later he was transferred to a public cell – “the happiest day of my life.” His family, meanwhile, only learned of his whereabouts after 10 months through leaks from humanitarian organisations. Many families, he said, never heard about their loved ones for years, and in 2005 his father set up a committee for the families of political prisoners. He was arrested and imprisoned for a month, but released because of UN Security Council pressure on Syria.

He said the Syrian uprising of 2011 followed the arrest of children aged 11 to 14 in the town of Daraa. The children were tortured and had their nails pulled out and their families were told to forget them. Regular protests following Friday prayers were dispersed by troops using live rounds, leading to many deaths and the detention of thousands. This brutality fuelled further protests. His father fled to Jordan after being arrested and tortured three times. His father-in-law, who was against the uprising, was nevertheless taken from his bed in July, 2011 and has not been heard of since.

He said armed resistance started when troops, sickened by the regime’s brutality, defected. The state responded by using missiles, mortars, barrel bombs and chemical weapons, and his own home town was reduced to rubble. He said there had been virtually no response from the international community, whose only concern was the use of outlawed chemicals.

ISIS took advantage of the power vacuum at the end of 2013. Dr Alhamwi said Assad had killed hundreds of thousands of civilians, but the international community could do nothing. “ISIS killed 10,000, and a coalition of 70 countries was formed to get rid of it,” he said. ISIS made initial gains, largely using foreign fighters, but now holds very little territory.

Iran had been on Assad’s side since the beginning, and Hezbollah fighters were also brought in from Lebanon. Despite this, Damascus was threatened with capture in December, 2015, and Russia intervened. It now, to all intents and purposes, occupied most of the country, although Kurdish fighters control part of it.

The regime took back control of Aleppo and many other areas, including his home town of Darayya, whose 200,000 population had fled, leaving it a ghost city. The international community’s solution was that threatened populations should leave their homes. This policy had led to 5 million Syrians taking refuge outside their native country, with a further 6-7 million being internally displaced. More than 212,000 named civilians had been killed by September, 2017, he said – 90% by the regime, 2% by ISIS, 0.36% by the Kurds, 2.5% by Russia and 1% by the international coalition, he claimed.

Dr Alhamwi said the international community justified its inaction by saying that Assad was the better of several evils. A Government minister he had spoken to said that if Assad’s regime collapsed, the vacuum would be filled by terrorists. His own view was that the regime’s multiple injustices would bring continuing instability not only to Syria, but to the rest of the world.

Asked what members of the public could do, he said they should ask the media and MPs how many more women and children had to be killed before action was taken. It was for MPs to decide what that action should involve. Assad would not come to the negotiating table until he realised the West was serious. At present there was no pressure on him. He added that there was more evidence of war crimes in the Syrian conflict than in any other war in history, He predictied that if “peace” came about under Assad, it would break down within 10 years.

Dr Alhamwi said that they were grateful for all the support Syrian refugees were receiving in the UK. He said they had not come here because they were poor – the majority had degrees. They were fleeing from a murderous regime, “Nobody wants to leave their country,” he said. “All of their memories, all of their lives are there.” But he reminded the meeting that Britain had promised to accept 20,000 Syrians by 2020. Germany had already taken a million.