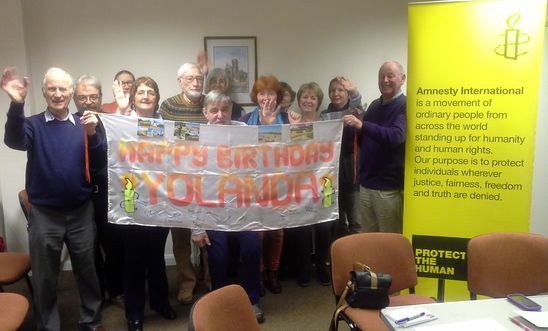 Yolanda Oquelí,is a community leader and anti-mining activist. Her community believed that open pit gold mining would prove dangerous for those living nearbye as it would pollute the water supply.
Yolanda is an activist and leader with the organization Frente Norte del Área Metropolitana (or ‘FRENAM – Resistencia La Puya’ as it is known in Spanish). The organization has led a peaceful protest camp outside the mine entrance since March 2012.

On 13 June 2012 in the town of San José del Golfo, in the department of Guatemala, Yolanda Oquelí was driving home after taking part in a peaceful protest. As she was travelling, two men cut across her path on a motorbike and fired at her. Yolanda was hit close to her liver with a bullet and three other bullets hit her car. She was hospitalised owing to the seriousness of her injuries. Incredibly, she survived. After the shooting, the Inter-American Commission on Human Rights (IACHR) ordered Guatemalan authorities to provide Yolanda with protective services. Since the attack, she has lived with security personnel whose aim is to protect her from further attempts on her life.

At great personal risk, Yolanda Oquelí returned to work in December, 2012.  She has received many threats and has been harassed many times as a result of her work defending human rights. The safety of Yolanda’s family is also at risk. She has filed several complaints with the Public Prosecutor’s office about these threats against her and other activists. She has received threatening phone calls, her house has been vandalised and she has even received death threats.

In September, 2014, Amnesty International met with Yolanda in Guatemala City. To date, no charges have been brought against those who attacked her and she is still waiting for justice. Despite the great personal risk, Yolanda continues to campaign on behalf of her community.

Community members say they were not consulted about the mine and they are worried that industrial gold mining will pollute their water supply. Recently, the Guatemalan government admitted the environmental impact assessment for the mine was substandard and ordered a new one.

In July, 2015, after community members took their case to court, a Guatemalan judge ruled that KCA did not have a construction licence and ordered the local municipal government to make sure work at the mine site is stopped. Daniel Kappes, the President of KCA has vowed to ignore the court order and continue mining.

Thousands of people have added their names to Amnesty’s petition calling on the Guatemalan authorities to fully investigate this crime and bring those responsible to justice. Please add your name to the petition today!