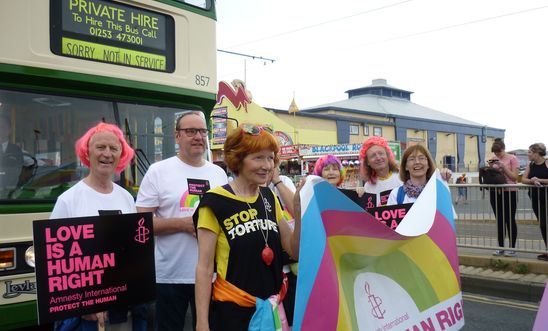 Thanks to everyone who played a part in the hugely successful Blackpool Pride festival on 11 June.

We got very, very, wet, made lots of noise and had loads of fun.  We also became a walking Amnesty choir thanks to Nic's choirmaster skills - “Singing in The Rain “and “All you need is Love “!!

Mike ensured that Radio Wave gave our group a mention in St John's Square as all the floats arrived at the end of the parade, and Gordon Marsden, MP, mentioned “human rights " in his address to the crowd and later came to our stall to have his photo taken with us and the banners .

I can tell you that several of our members looked very fetching in soggy white Amnesty T-shirts and rainbow coloured wigs!!

On a serious note we got almost 300 signatures, whilst on the stall in the Winter Gardens, for the Tunisia petition which affirmed full solidarity for those activists who are taking a stand in support of LGBTI Tunisians. The Tunisian Penal Code criminalises same-sex sexual relations between adults. It also includes articles that criminalise acts and expression that are “offensive or undermine public morals and decency” and which are used to prosecute people based on the expression of their gender identity. These laws put LGBTI people at risk of arrest of prosecution on the basis of their real or perceived sexual orientation or gender identity and create a climate of abuse from State and non-State officials with little accountability. This petition will be sent to Prime Minister Habib Essid.

We ran out of action cards , gave out many , many  Amnesty badges, balloons , stickers and sweets , had lots of great conversations around  Amnesty and the Tunisia action, and found some " hidden " Amnesty members !

Well done to everybody