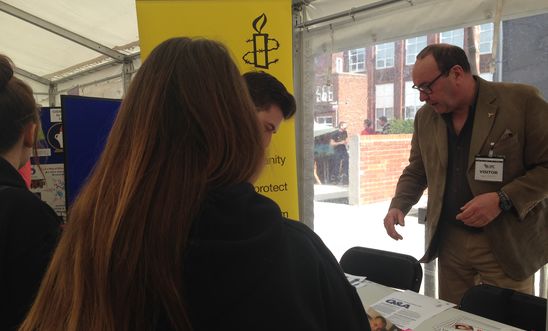 On Tuesday 22 September Margaret and I (Norah) had a stand at the Feshers’ Fair at the Bispham FE Campus.  It was held in the sports hall and was a lively affair with a diverse selection of stands offering both information and opportunities to join societies - there was even an assault course outside. We attracted attention from some of the students, most of whom had never heard of Amnesty International but we had a lot more interest from the staff when we explained about Amnesty youth groups. There is a definite possibility that we may be invited in to speak to tutor groups and from there we may be able to facilitate the founding of a youth group and raise awareness about Amnesty and human rights.

On 24 September Mike and I had a stand at the University Campus of Blackpool and Fylde College. This was an even livelier affair with a disco in a teepee and a great selection of stands stretching across two marquees. We were very busy giving out information about Amnesty’s work and answering the students’ questions. The Stop Torture campaign materials elicited a shocked response from most of them and we had a very positive response when we suggested starting a student group. As the students seemed interested, several members of the HE staff were keen to facilitate this project.

Overall, the time spent during the two days was very worthwhile.  We spread the word about Amnesty’s work and managed to get over 100 cards signed to be sent to governments, identifying individual torture cases. We have now raised awareness in the college with the possibility of starting both a youth group and a student group. Fingers crossed!!!