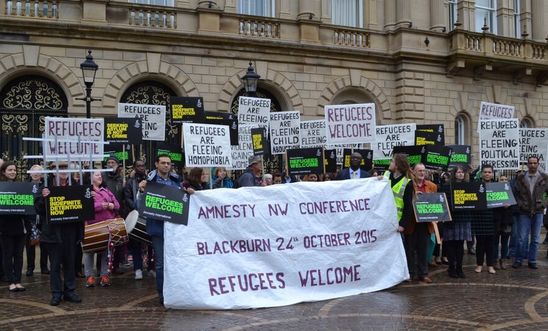 On Saturday 24 October Jennifer, Karen, Margaret and Norah attended the AIUK North West Regional Conference which, this year, was held at Blackburn. The theme was asylum Justice and the key note speaker was Dr Charles Raymond Dotou, himself a refugee from Senegal. Dr Dotou practised medicine in Senegal and he was (and still is) a human rights activist.  His work with the LGBTI community and the fact that he spoke out against female genital mutilation brought him to the attention of the authorities.  He was threatened and beaten and in the end he had to flee the country in order to save his life; he is now seeking asylum in the UK, where he is using all his skills in supporting and fighting for human rights. He was a passionate speaker and his account clearly highlighted the need for our compassion and support for refugees.

The day included several interesting workshops one of which was led by Eman Mashhour, an activist in support of women’s human rights, a mother of three grown up children and a refugee from Yemen.  She gave a very moving account of her journey from Yemen where as a graduate from Sanaa University, she worked as a teacher to her arrival, as a refugee, in the UK. Like Charles Dotou, Eman is also using all her skill, experience and expertise in support of women’s human rights.

There was a street action which involved a noisy march with banners through the centre of Blackburn (led by drummers) in support of refugees.  The chant was ‘sing it loud, sing it clear, refugees are welcome here!’

We had some interesting updates from members of the AIUK Board and a plenary session on the Asylum Justice Project with emphasis on the fact that the UK is the only country in the EU that has no time limit on the length of time refugees can be detained.

Well done to Sameena Mathiessen and her team for the organisation of an interesting and successful event.