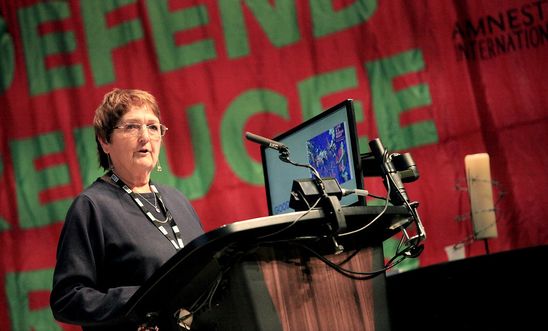 The AIUK National Conference and AGM took pace, this year on 8th and 9th of April at Swansea University

Four delegates from Fylde Coast Amnesty attended, Jennifer Jaynes, Julie Bullough, Anne Nyquist and Norah Lynam.  In spite of the extremely long train journey, made even longer by delays caused by a motor vehicle crashing into a railway bridge at Shap, we all agreed that, as usual, it was a wonderful and inspiring event.  It was good to be with like-minded people and to hear about the activities of the section during the last year.

The programme was interesting.  After a welcome from the AGM chair, Alex Rhys, conference was opened and the Amnesty candle was lit by Salil Shetty who is the retiring Secretary General of Amnesty International. He spoke about the roller coaster pace of his eight years with Amnesty International.

Ruth Breddal, the Chair of AIUK, Meredith Coombs, Treasurer and Eilidh Douglas, the Chair of the Activism Sub Committee all gave interesting and amusing reports on the events of the year.  Kate Allen, director of AIUK, gave a powerful overview of the state of the human rights in the world and the work of Amnesty International in fighting for justice.

There were a variety of thought provoking workshops including:

Check Your Privilege, Use Your Power (which I found extremely illuminating);

Refugees in our Communities;

Resisting discrimination and abuse in the Occupied Palestinian Territories

The BRAVE panel session, featured women human rights defenders from Northern Ireland, Poland, UK and AIUK.  They spoke in strong terms about the importance of having the freedom to campaign for better rights, whether it be on sexual and reproductive rights in Poland and Ireland or freedom to participate in campaigning on social media without being the victim of trolling.

On Sunday the main business of the AGM took place that is, the discussion of the resolutions which will influence AIUK policy over the next few years.

It was a very good conference as ever and then we headed for the beginning of the very long train journey home.