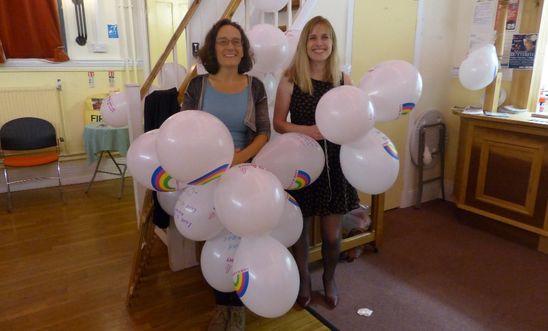 A huge show of support for our LGBTI solidarity action. Love is a Human Right.

One of AIUK's suggested monthly local group actions for June was to show solidarity with the LGBTI community in Tunisia and what better way than to write messages of solidarity on balloons and sign letters to the Tunisian authorities at the screening of the film ‘Pride’ in Midsomer Norton’s town hall.

We were overwhelmed by the show of support for our solidarity action.

In total 20 people wrote messages on balloons and posed for their photo to be taken and 22 letters were signed, during the interval of the film.

All of the photos have been emailed to AIUK who will use them to create posters and postcards which will be shared with LGBTI organisations in Tunisia who will in turn share them with survivors of sexual and gender-based violence.

If you would like to send a letter to the Tunisian Prime Minister then please contact me at njwardman@yahoo.co.uk for your copy of the letter.