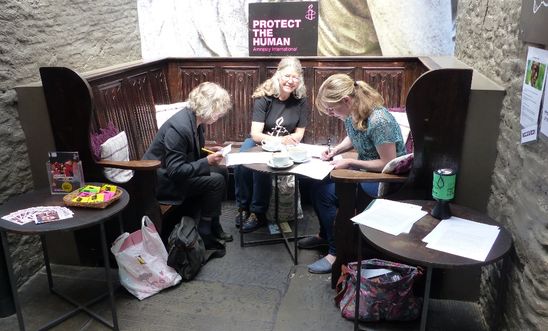 Our first ‘pop-up letter signing shop’ was held in the Archangel pub on King Street, Frome on Saturday 28th May. In total 21 letters were sent.

We sent letters on behalf of a prisoner of conscience Sheikh ‘Ali Salman, the Secretary General of the main opposition party in Bahrain, imprisoned for 4 years (now increased to 9 years!) for criticising the government in speeches he made in 2012 and 2014.

We also sent letters to the Tunisian authorities to highlight the discrimination, harassment and violence that many Lesbian, Gay, Bisexual, Transgender and Intersex (LGBTI) people are facing in Tunisia as a result of Article 230 of the Penal Code which criminalises same-sex consensual sexual relations between adults.