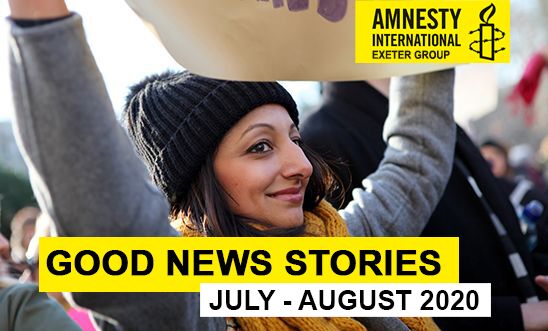 Cuba: Opposition Leader Released from Prison
An opposition leader has been released from prison after being in detention since October 2019. José Daniel Ferrer García leader of the unofficial political opposition group “Patriotic Union of Cuba” (Unión Patriótica de Cuba -UNPACU) was sent to house arrest in Santiago de Cuba in Cuba, on April 2020, after a trial where he was convicted and sentenced to four and a half years. José is now safely back with his family.

Upon José arrest he was held incommunicado for 72 hours and remained in detention without charges for at least 30 days, according to information available to Amnesty International. In late November 2019, Amnesty International received a document, apparently issued by the Provincial Prosecutor of Santiago de Cuba, dated 7th October 2019, stating that José had been charged with the offence of “injuries” (lesiones) and placed in preventive detention as a precautionary measure. This document was given to his family more than 30 days after his detention, according to their reports. Amnesty International sent an open letter to the president of Cuba, reiterating our request to visit Cuba and monitor in situ his forthcoming trial. The Cuban government never replied to our request.

Irregularities in due process of law in cases related to freedom of expression have been documented for decades in Cuba. The Cuban authorities prevented the international press, the European Union and Amnesty International from monitoring his trial. On the day of his trial, Cuba’s Ministry of Justice tweeted that José would get a fair trial, but in the same tweet called him “a common criminal”, in violation of his right to the presumption of innocence.

Although it was good news that José was finally able to go home, instead of remaining in prison, where he would be at greater risk of COVID-19, his conviction and sentencing is still shameful. Amnesty International will continue to monitor his case. After his release, José deeply thanked Amnesty International for all the support and hard work on his behalf and reconfirmed his commitment to continue his efforts despite the sentencing.

Kelly Aguilar, finally free!
A 24-year-old transgender asylum seeker, has been released from US immigration detention on July 14, 2020 after spending almost three years in detention. Kelly Gonzalez Aguilar fled Honduras when she was just 12 due to violence against her based on her transgender identity before being detained for two years and 11 months. Calls for her release ramped up recently when Kelly feared becoming infected by COVID-19 because of the inadequate measures taken by authorities to protect detainees and staff from the virus. She told Amnesty “our lives are in danger because there are people here who tested positive for the COVID-19 virus and there is nothing we can do. More detainees keep coming and going. This is a time bomb for our lives. We pray that someone will do something.”

Kelly is one of many transgender women being held in immigration detention in the US, where they risk ill-treatment because of their gender identity, and because of COVID-19. Kelly is now safe with her supporters and her lawyer credits this campaign for her release; as there was no judicial reason for freeing her.

The Court found that sending refugee claimants back to the US violates their Charter right to liberty and security of the person because many of them are arbitrarily detained in the US in immigration detention centres or county jails, often in atrocious conditions and in clear contravention of international standards.

The Court has suspended the effect of its decision for six months to leave time for Parliament to respond. Given that the Court has clearly set out the ways in which detention in the US violates people’s fundamental rights, the organizations call on the Government of Canada to immediately stop sending people back to the US under the Safe Third Country Agreement, and not to appeal the decision.

Secretary General, Alex Neve for Amnesty International Canada, responding to the decision said: “While the Federal Court has provided the government with six months leeway, it is imperative that Canada immediately end the return of claimants to the US. The Safe Third Country Agreement has been the source of grave human rights violations for many years, unequivocally confirmed in this ruling. That cannot be allowed to continue one more day; and is of even greater concern now given the prevalence of COVID-19 in immigration detention in the United States. Canada should further revoke the Order in Council which practically closes the border to refugee claimants as part of Canada’s COVID-response.”

Under the Safe Third Country Agreement, implemented in 2004, refugees who present themselves at a Canada-U.S. border post seeking to make a refugee claim in Canada are, with limited exceptions, denied access to the Canadian refugee system and immediately returned to the United States. Since the Agreement does not apply to people who cross into Canada other than at an official border post, people in need of safety in Canada have been crossing in significant numbers in between ports of entry. Withdrawing from the Agreement would not only ensure that Canada meets its legal obligations, but would also allow people to present themselves in an orderly way at ports of entry, ending irregular crossings.