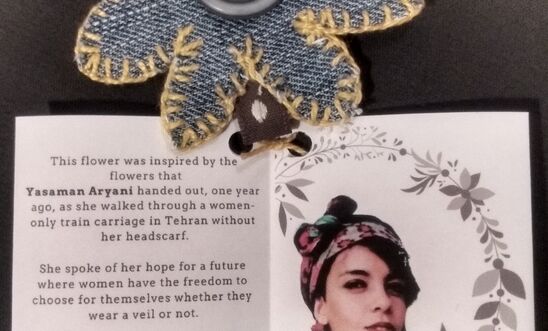 Adding a drop of craftivism to Amnesty's work

Sometimes, as Amnesty International activists, it's all about the numbers, right? We're trying to get as many signatures as we can on a petition, or make a social media post go viral - to reach as many people as we can, as quickly as we can. And then, at other times, it's about fewer, but deeper, connections. This goes right to the roots of the movement. When you get a handwritten letter, it really brings home that there was a person at the other end, who cared enough to write and post something to you. Handwritten letters are full of personality, and give that extra sense of connection.

Craftivism (using craft in activism) is based on similar ideas. Sometimes called slow activism, craftivism is all about taking the time to create something by hand, which demonstrates the depth of your feeling on the issue and will leave a lasting impression on whoever sees it. There's a really nice introduction to craftivism on BBC iplayer at the moment, presented by Jenny Eclair, which shows the diverse ways that it has been used to bring about meaningful change.

We thought that we could use craftivism to start conversations about the Tehran Three - Yasaman, Monireh and Mojgan - who are in jail for their peaceful protest against compulsory veiling laws. They gave out flowers as part of their protest, so we thought we could tell their story by also giving out flowers - in our case, making them out of fabric. We accompanied this with a gentle pointer towards the Amnesty International petition calling for their release. In our first attempt, pre-pandemic, we attached little notes to the flowers and left them in cafes and bookshops. This year, we were more restricted, so we've been sending them to friends and family. Hopefully, the flowers will be kept longer than leaflets on their own would be, and they will act as a reminder and conversation-starter every time they are worn.

Looking back, crafting has always been integral to grass-roots Amnesty campaigning. We have photos and newspaper clippings of sponsored "knit-ins" that our group did to fundraise, back in the 1980s. Our stalls at local fairs are topped by colourful fabric bunting spelling out "Amnesty", which was hand-made by two of the group, long before most of the current members joined. I'm sure this bunting makes our stalls seem much more friendly and approachable. We also try to include a creative children's activity on these stalls too - this all helps to make them places where people feel comfortable and want to linger for a chat.

We're not going to stop marching, petitions, media stunts, talking to MPs, letter-writing, or any of the multitude of other ways we campaign for human rights. But we'll keep an eye out for where it would help to thread a little craftivism through these activities too.