Rave in the Nave 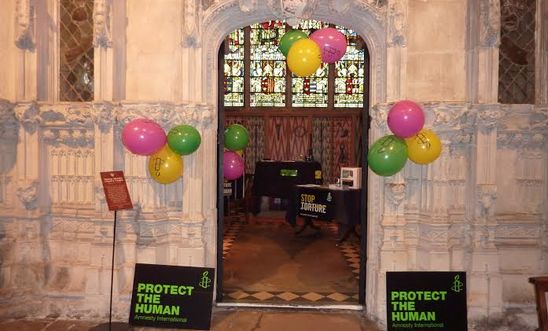 On Friday 11th July, Ely Cathedral was transformed from Anglican church to party venue. It was the Rave in the Nave, Ely Cathedral’s annual, ecumenical, Christian worship event for young people aged 12 and over and hosted by the Cathedral for more than 20 years. We were invited to bring the human rights message and were keen to highlight two of Amnesty’s current campaigns – on the World Cup and on torture. The tools we used to persuade the attendees to head o...ur way were a carnival cut-out of a prison cell and a badge-making machine. Tucked towards the back in the (comparative) peace of Bishop Alcock’s chapel, we encouraged the ravers first to take selfies while sticking their heads through our carnival cutout - and then promised to help them make badges. Both activities proved popular, and once in to the chapel they were able to find out more about the campaigns and the work of Amnesty International. Many teenagers chose to sign campaign cards for Moses Akatugba, a Nigerian man who was arrested at just 16, claims he was tortured into signing a confession and now aged 26 is on death row. Others signed the World Cup petition which called for immediate, independent investigations into the many abuses committed by Brazilian police against protestors before and during the World Cup. All in all, it was a successful night and we were very happy to have so much exposure on our campaigns to so many young people - some of whom will hopefully become Amnesty members in the future.