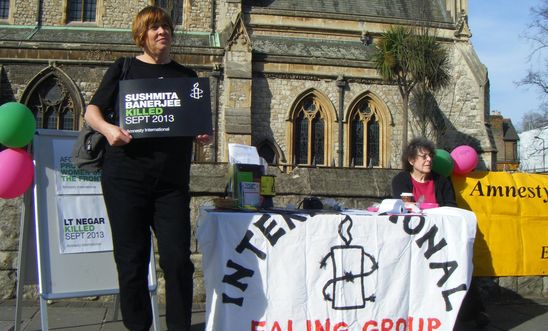 To mark International Women’s Day on Saturday 8th March, Ealing Amnesty Group held a photo action in support of Women’s Rights in Afghanistan.  Members of the public were invited to have their photograph taken holding one of our placards giving details of Women Human Rights' Defenders who have been killed recently.

Thank you very much to everyone who took part – we had an excellent turn out and managed to collect 107 signatures and 41 photographs.

Violence against women in Afghanistan increased by 25% in the second half of 2013. We are joining Amnesty's campaign to ask the UK government to influence the Afghan government to ensure the safety of Women's Human Rights Defenders.  More information on the campaign is available here