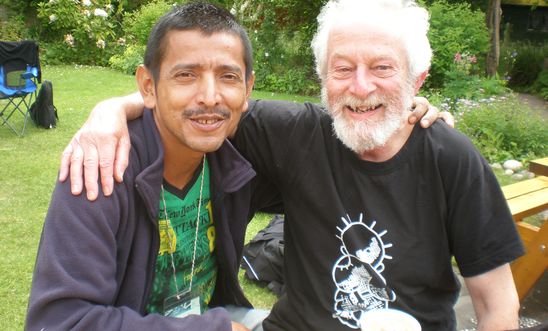 A member of Dundee Amnesty Group was privileged to have the opportunity of a meeting with Gildardo Tuberquia, one of the leaders of the San Jose Peace Community in July this year. The meeting was at the Findhorn Community, near Inverness. We were able to speak together for about an hour, partly with the aid of an interpreter, Our group has been campaigning with this situation, over the human rights abuses this rural community has experienced over many years, including murders, death threats, constant harrassment, etc. The source of these problems has been the activities of paramilitary groups with collusion from the Colombian army and government inaction....all this against a background of civil war with the revolutionary group, FARC. Our discussion was very helpful in getting a direct perspective of these problems and how the community had tried to deal with them. Gildardo also told me he felt  that the letters we sent as Amnesty members, along with many other campaigners, did have some impact on the Government and he suggested we email copies of these to his Community as their awareness of this would help to strenghen their resolve. He also suggested  facilitating a support group in a local school or University, which could communicate directly with the Peace Community by email. The courage of this man was very moving since, as a community leader, he will be very exposed to death threats and real danger of assassination.