January 2018: Remembering and Welcoming the Persecuted 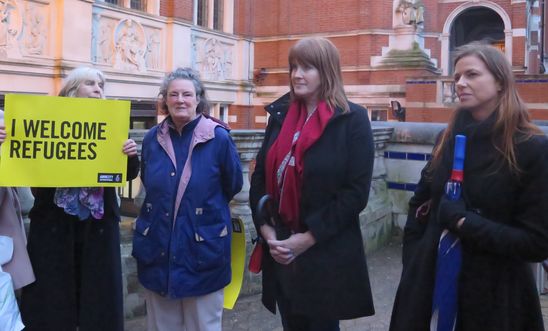 On 27th January the world marked Holocaust Memorial Day. Holocaust Memorial Day (HMD) serves an important reminder of our need to come together as a society to stand against hatred and protect the fundamental human rights of every human being. On this exact date in 1945, Auschwitz-Birkenau, the largest of the Nazi concentration camps, was liberated after a period of immesurable horror.

During WWII, the Nazi regime systematically killed six million Jews, as well as other people they considered “undesirable” including political opponents, members of the LGBT community, people with disabilities and members of the Roma community.

Despite the horrors of the Holocaust having been followed with cries of “Never Again!”, we have sadly seen subsequent genocides worldwide including those in Srebrenica, Darfur, Cambodia and Rwanda, which we remember on this important day.

Human rights for all: The power of words

The Holocaust was a heartbreaking tragedy for both the Jewish community and wider humanity. It marks the gross violation of the innate dignity and right to life of each human being and each individual's right to live a life free from discrimination and persecution, with full respect for freedom of belief and the right to full protection of their economic, cultural, social and political rights. HMD therefore gives us the opportunity to reflect and learn from the important lessons of the past.

This year, the theme of HMD focused on the power of words. Words have huge potential to promote peace and equality, yet also to marginalise, demonise and “otherise” communities. Persecution can grow out of manipulative words, and the process that leads to genocide begins with discriminative language and careless use of words.

We must also question silence - both our silence towards horrors unfolding in other parts of the world and the political silencing of voices. It is important that we use our voices to stand up to human rights abuses.

For this reason and to mark this important day, Amnesty Croydon held a vigil in honour of all of the victims of the Holocaust and subsequent genocides and to reflect on current human rights abuses worldwide.

We recognise today's challenges and in particular here in Croydon, where many refugees and asylum seekers are first re-located, we recognise the plight of refugees worldwide. During WWII in fact, many Jewish children themselves were forced to flee to the UK in search for safety.

In January we held an I Welcome exhibition in Croydon library with the various images bearing witness to many tragic situations around the world, including from the period immediately following the Holocaust to the current reality of people being forced to make dangerous journeys across the Mediterranean in search of safety and security.

On January 27th, we then held a vigil outside Croydon Library to mark HMD, to remember the millions persecuted throughout the Holocaust and subsequent genocides, whilst also reflecting on the millions of refugees who are currently fleeing persecution worldwide.

In 2018, we particularly recognise the need for the UK to accept more refugees, especially the large numbers of unaccompanied children - whose cause has been championed by Lord Alfred Dubs who himself arrived in the UK as a child refugee during the Holocaust.

The vigil was attended by member of the Croydon group and local community, as well as Sarah Jones, our MP for Croydon Central who kindly joined us for the event.

Thank you to everyone who attended the vigil and visited the photo exhibition. May we continue to recognise the positive and negative power of words and our duty to protect the fundamental human rights of each and every individual, regardless of gender, age, religious affiliation, sexuality, ethnicity or nationality.

In remembrance of the victims of the Holocaust and all subsequent genocides.