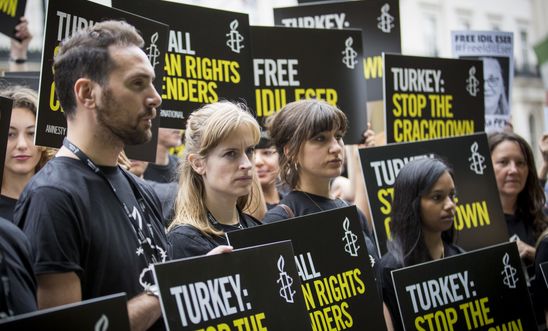 Richard Williams will provide an update on recent human rights abuses caused by the Turkish government’s continued crackdown on civil society, including a new wave of detentions of activists and academics which took place this November.

Richard Williams said: “Mass arrests and the targeting of journalists, opposition leaders and NGOs by the Turkish government means that a climate of fear is stifling Turkish civil society.

“Although the state of emergency in Turkey has been officially lifted, last month’s spate of detentions of civil society activists indicates that the situation there remains as perilous as ever.

“The international community should stand with the thousands of Turkish citizens falsely accused of supporting terrorist organisations, and call on Turkish authorities to restore the normal rule of law, respect freedom of expression and put an end to the climate of fear.”

At the talk, there will be a chance to find out how best to show solidarity with activists in Turkey, as well as how to take part in Amnesty’s annual Write for Rights Campaign, which sees millions of people write letters of support to persecuted human rights defenders across the world. The talk is free to attend.