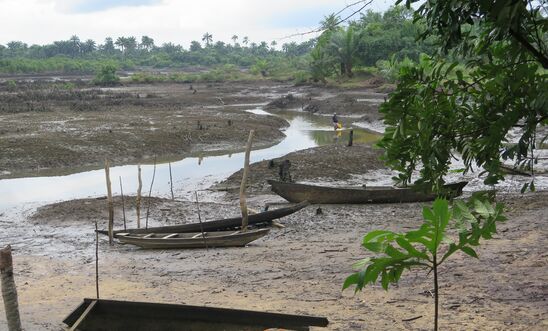 When the divestment talks between Shell Petroleum Development Company (SPDC) and Nigeria’s federal government kicked off in May this year, divestment  became a frequent term used within Nigerian corporate spaces and local newspapers. While the federal government weighs the impact of Shell’s divestment on Nigeria’s economy, others expect it to lead to increased unemployment. The oil sector contributes 88% of Nigeria’s foreign exchange earnings, with Shell being Nigeria’s largest oil operator – accounting for 39% of the country’s total oil output.

Missing from these discussions has been any form of commitment on the part of Shell or the Nigerian Government to address the human rights implications that come from 60 years of oil extraction in the Niger delta.

Since Shell’s divestment plans became public, many local oil companies, especially new entrants, have shown an appetite to pick up these assets. However, the communities whose lives have been blighted want to ensure their human rights will not continue to be sacrificed on the altar of oil.

For six decades, the government has accrued huge oil wealth from the Niger delta, but most of this has gone to the federal government and the oil companies who operate a joint business arrangement. The local political elites have also benefited from oil exploration disproportionately. The communities where oil exploration takes place have continued to lose out.

Local residents suffer pollution and neglect, despite the wealth and development they hope will come from oil. This thwarted expectation has led some young people to violently resist their local elites and the entire oil industry in an effort to challenge their exclusion and to insert themselves into the national economic life.

The Niger delta had a delicate and diverse ecosystem before oil began being extracted. Degradation has continued at a rapid pace over time as federal laws have  prioritised profits over human rights and environmental protection. Shell has also contributed to this destruction through its reckless oil spills.

Since 2011, Shell has reported over 1,010 oil spills, equating to 110,535 barrels of oil being discharged. Despite these figures, it must be kept in mind that Shell’s oil spill data is very unreliable and widely disputed by community members. The main reason for this is that the Joint Investigation Visits (JIVs) - the formal process of assessing the cause of oil spill lacks transparency. Shell finances the JIV and has undue influence over the outcome of the process. This makes it easier for Shell to attribute most of its oil spills to sabotage.  Classifing spills as acts of sabotage rather than operational failure allows Shell to avoid undertaking any clean-up activity  and to compensate the community. As such, Shellis not held properly accountable for pollution.

Local communities, on the other hand, claim that while sabotage is a huge problem in the area, Shell substantially underestimates spills from operational failures. The consequence is that the responsibility for remediation is often disputed, and those affected are inadequately compensated or not compensated at all, despite a recent decision by a Dutch and English court that might bring a glimmer of hope. The impacts of oil spills on the health and livelihood of local residents have been devastating. Farming and fishing, the primary means of livelihood for the majority of people, have been greatly undermined. Many communities are also  unable to access safe drinking water.

In 2011, the United Nations described the Niger delta as the most polluted place in the world, requiring about 30 years to clean-up. Although some clean-up activities have begun, no polluted site in the Niger delta has been entirely cleaned by Shell ten years after the UN report despite the urgent call for remediation.

As Shell plans to divest, it will leave behind swathes of polluted land and rivers in the Niger delta. The government must ensure that Shell leaves a clean-up fund behind or that whoever buys Shell’s assets has the capacity to better protect the environment than Shell, rather than adopt a ‘business as usual’ approach. Not every buyer will have the financial capacity for decommissioning and for land restoration. Without this dual-pronged approach, the local communities, including their future generations will have to permanently forfeit their land for the sake of oil profits going to the private companies and the Nigerian government.

The Niger delta communities have lived with the environmental burden of oil extraction for many decades. It is time for the Nigerian government to ensure that Shell and any successor company rehabilitate the land and provide reparations for the harm already caused. Until this happens, the human rights of those living in the Niger delta will continue to be expendable.