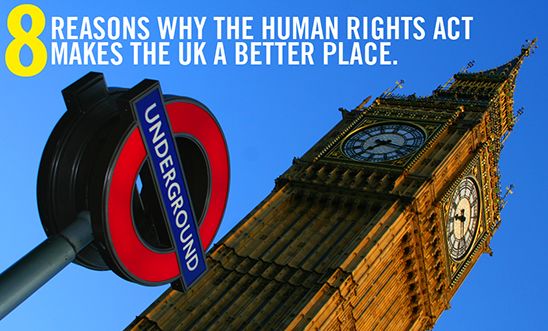 Back in December 2013, Chris Grayling said he believed that the European Court of Human Rights (ECHR) did not ‘make this country a better place’. Presumably he thinks this about the Human Rights Act too given the government's pledge to scrap it and turn human rights into a privilege Parliament chooses to bestow on the few it deems ‘worthy’.

We fundamentally disagree – here are eight reasons why the Human Rights Act makes the UK a much better place.

In the aftermath of the devastation of two world wars, our human rights were enshrined in law to ensure that these atrocities would never be repeated. The UK was instrumental in establishing the ECHR to protect us from human rights abuses by our own governments.

The Human Rights Act then came into force in the UK in 2000, bringing most of the rights contained in the ECHR into UK law so that individuals could take their cases to domestic courts for British protection, instead of having to wait for the slow wheels of justice to turn at the overstretched European Court of Human Rights.

2. Protecting us at our most vulnerable

‘We have never been separated in all our years and for it to happen now, when we need each other so much, is so upsetting. I am lost without him – we were a partnership’.
Mrs Driscoll

This was a clear breach of the couple's right to a family life as protected by the Human Rights Act, and a public campaign was launched to encourage social services to think again. As a result, Mrs Driscoll’s needs were re-assessed and the couple were reunited – setting a precedent for elderly couples to be kept together in the same care home.

In a perfect world, we would all treat each other with the respect and care every human being deserves. Sadly, this isn’t a reality. It’s usually the most vulnerable, particularly the elderly and the sick, who suffer the most. That’s why the Human Rights Act places public authorities in the UK – including hospitals and social services – under an obligation to treat everyone with fairness, equality and dignity.

3. Protecting women from domestic violence and keeping their families together

The obligations in the Human Rights Act helped a woman and her children find a safe home after leaving an abusive husband. Her husband had kept tracking them down, forcing them to move again and again.

When she arrived in London the local social services department told her she was an unfit parent because she was making the family intentionally homeless by moving without justification and her children would be taken into foster care. With help from an advice worker, she argued the department was violating her rights under the Human Rights Act. At that point, they agreed – and the family stayed together.

4. Making it safer to be gay

Today, being gay could get you arrested or even executed in at least 78 countries. Thanks in large part to the ECHR and the Human Rights Act in the UK, our rights to be treated as equals with equal access to protection regardless of gender, sexuality, race or age are protected by law. The fight for equal rights has been significantly advanced by the laws.

Right up until 1982, ‘male homosexual acts’ were a crime in Northern Ireland. It was finally decriminalised following a human rights case brought forward by Jeff Dudgeon, a gay rights activist from Belfast.

In another landmark case in 2000, the Army was found to have violated the rights of two British servicemen by dismissing them for being gay. This momentous case lead to a change in UK law to allow gay members of the armed forces to be open about their sexuality.

In 2008 the European Court of Human Rights ruled that the UK was violating an individual’s right to privacy by holding fingerprint and DNA information of people who hadn’t been charged or convicted of a crime - they said retaining the information ‘could not be regarded as necessary in a democratic society’.

At the time, nearly one million innocent people had their DNA or fingerprints on the database, a fifth of the total database. As it swelled so did the concern that police were building a database of ‘presumed guilt’. Beforehand, the UK Law Lords had defended the police’s right to hold our personal information in this way - it took a European Court judgement for common sense to prevail.

6. Helping us challenge these injustices in the UK courts

Introducing the Human Rights Act meant that UK courts could look at the ECHR and judge whether the authorities were respecting the rights it protected. More than that, it requires public authorities to ensure their decisions and actions do not violate rights, so there is far less need to go to court to get protection.

Before that, for over 20 years, the only way to challenge that was at the European Court of Human Rights. The Human Rights Act bought our rights home, and countless everyday decisions, like the domestic violence case above, making the UK better without a costly court process.

The Hillsborough disaster of 1989, when 96 football fans lost their lives during the semi-final of the FA cup between Liverpool and Nottingham, will never be forgotten. The families have fought ever since for the truth to be told and justice to be done. Through Article 2 (the right to life) of the ECHR protected in the Human Rights Act – which places a duty on the state to investigate these kind of deaths properly (most notably when agents of the state, like the police, are involved) and to do so with proper participation from the families of the bereaved – they were able to obtain a new inquest.

The first inquest in 1991, before the Human Rights Act, had been very narrow in scope and had said these were accidental deaths. Article 2 inquests are an 'enhanced' type of inquest which have a much wider scope than the usual aim of deciding by what means someone died. When Article 2 applies, they must also look at 'in what circumstances' the death occurred. In April 2016, the jury delivered their verdict on that question – it concluded that the 96 fans were in fact unlawfully killed.

After 27 years fighting for justice, this important victory was down to the absolute perseverance of the relatives of the victims in their campaign for truth.

7. ...and challenge that decision at a higher court

The only country in Europe not in the ECHR is Belarus, Europe’s last dictatorship. Even Russia and Azerbaijan – countries with less than stellar human rights records – are part of the Convention. Even then, the ECHR doesn’t set law in any of these 47 countries. It makes a judgement when something is ‘incompatible’ with our protected human rights, and lets the government in question decide how to fix the incompatibility.

In the case of the DNA database, the UK government put time limits in places so DNA of those not charged or convicted is held for just six years – balancing our right to privacy with the responsibilities of the state to tackle crime.

8. Allowing the UK to take a stand for human rights everywhere

If Human Rights can be trimmed to match "British Values", what's our answer when Iran hangs gay people saying that reflects Iranian values?

We’re rightly proud of our tough stance around the world on human rights. The UK will not extradite to a country where the death penalty is used. UK politicians have called for Guantanamo to be closed and laws criminalising homosexuality in Africa and elsewhere to be overturned.

What happens when we remove ourselves from the court and laws that protect our rights in the UK? Will our attempts to end female genital mutilation or ensure women’s rights lead to a polite refusal from the country in question?

We can’t make the world a better place if we turn our back on human rights, and European convention and court that we helped put into place to make everyone’s lives better.