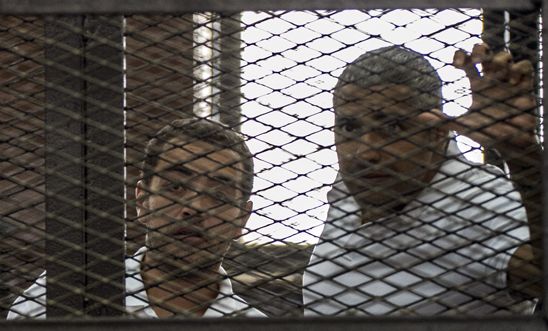 Media workers Mohamed Fahmy and Baher Mohamed are free. Just weeks after a court sentenced them to another three years in prison, Egyptian President Abdul Fattah al-Sisi has cut short the rest of their sentences and released them under a presidential pardon.

Thank you to all the supporters sending us the news, we have heard and are very happy. AJ Staff is Free!

For more than a year and a half they have been persecuted by Egyptian authorities – forced to endure two drawn-out, politically-motivated trials and months in prison – simply for their work for news channel Al Jazeera English.

Their release is very welcome news, although they should never have been jailed for the ludicrous charges of ‘broadcasting false news’ and operating as journalists without authorisation. We continue to call on Egyptian authorities to drop all criminal charges against them and their colleague Peter Greste.

With sincere thanks to all the millions who fought to #FreeAJStaff. @Bahrooz and @MFFahmy11 are free. Now for pardons for the rest of us!

The Al Jazeera case has come to symbolise Egypt’s renewed crackdown on free speech, showing the extent of restrictions on media by the ruling party, as well as the constraints on media workers in Egypt working to give an accurate picture of the news.

Over 20 other journalists remain imprisoned in Egypt, many on similar charges of ‘broadcasting false news’.

Mohamed Fahmy and Baher Mohamed were among 100 prisoners freed on 23 September by presidential pardon as part of Eid celebrations. Many of the prisoners had been punished for breaking ‘laws’ that deny their human rights: activists Yara Sallam, Sana Seif and Omra Hazek were all freed after their prison sentences for daring to defy Egypt’s strict protest laws were cut short.

They're really out! Sanaa Seif (left) and Yara Sallam (right) after 15 months in jail pic.twitter.com/E5MJS7ph1s

Yet many activists and journalists remain in prison in Egypt, as authorities there continue to crack down on human rights.

The back story: jailed for journalism – twice

It’s less than a month since Mohamed Fahmy and Baher Mohamed were found guilty and imprisoned for a second time – just months after they were released on bail when their original sentence was ruled void because of a flawed trial.

Mohamed Fahmy, a duel Canadian-Egyptian citizen and former head of Al Jazeera’s Egypt bureau, and Egyptian news producer Baher Mohamed had already endured more than 20 months being grilled and punished by authorities in Egypt over their work for Al Jazeera when they were found guilty – for a second time – on 29 August, and sent back to prison after six months on bail.

A criminal court ruled that it did not recognise the men as journalists and that they had both held broadcasting equipment without authorisation. It claimed they had broadcast lies about Egypt on the Al Jazeera network, and that by working for Al Jazeera the men were by default members of the banned Muslim Brotherhood group. Baher and Mohamed’s colleague, the Australian journalist Peter Greste, was found guilty of the same charges in absentia.

Mohamed Fahmy was due to serve a three year prison sentence; Baher Mohamed was dealt three-and-a-half years in prison and a fine of 5,000 Egyptian pounds – an additional punishment for picking up a bullet casing, which he said was a souvenir from a reporting trip he had worked on.

The ruling appeared to be politically-motivated, with the intention of silencing media outlets critical of Egypt’s rulers and sending a message to the Muslim Brotherhood that any association with the group will be punishable. The men’s trial and imprisonment was an affront to human rights: they had committed no crime, and as such were prisoners of conscience, punished for exercising their right to free speech and association. We continued to call for their immediate release.

Shocked. Outraged. Angry. Upset. None of them convey how I feel right now. 3 yr sentences for @bahrooz, @MFFahmy11 and me is so wrong.

Mohamed Fahmy and Baher Mohamed were first arrested in December 2013, along with their colleague Peter Greste. The arrest of Mohamed and Peter was broadcast on Egyptian television in an apparent attempt to show them as members of a terrorist group.

In January 2014, all three men were charged with a string of offences relating to their work as journalists, including ‘broadcasting false news’, ‘possessing broadcasting equipment without a permit’ and ‘aiding or belonging to the Muslim Brotherhood’.

After a long and farcical trial where the prosecution did not present any evidence related to the charges and key witnesses contradicted themselves, in June 2014 the three men were each sentenced to a minimum of seven years in jail.

Tens of thousands of people in the UK signed our petition calling on Egyptian officials to free them. The men’s arrest and imprisonment was criticised by human rights organisations, inter-state bodies and governments around the world.

In December last year an appeals court ordered a retrial for the three men after their trial was found to be flawed and prosecutors acknowledged major problems with the verdict.

As a result, in February 2015, after more than 400 days in detention, Peter Greste was deported from Egypt to his native Australia, and Mohamed and Baher were released on bail. Mohamed Fahmy renounced his Egyptian citizenship with the hope of being deported to Canada.

While their release was welcome news, we continued to call on Egyptian authorities to drop the ongoing charges against the three men altogether. Instead, Mohamed and Baher were summoned to a retrial that lasted months. The reimprisonment of the men in August confirmed the political basis for their trial and the Egyptian authorities’ lack of respect for free speech.

We will continue to work for free speech to be respected and protected in Egypt.