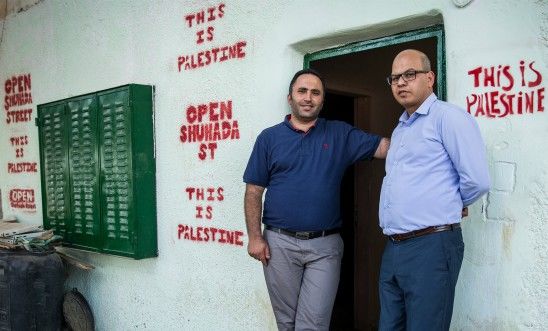 Issa Amro and Farid al-Atrash are Palestinian activists who are facing charges in an Israeli military court, just for peacefully protesting against illegal Israeli settlements.

They appeared in court several times last year and are required to attend again on Tuesday 20 February. Both risk being sent to prison if found guilty.

Their charges must be dropped. Help us build support for Issa and Farid by sharing their story now:

Issa (pictured above, left), a 37-year-old engineer from Hebron, is the founder and coordinator of the Youth Against Settlements (YAS) group in the occupied West Bank city of Hebron. He is internationally renowned for his commitment to peaceful activism against the illegal Israeli settlements. In his own mournful words, these settlements are "destroying the Palestinian identity."

Farid, 41, is a lawyer from Bethlehem, and is the head of the southern districts of the Independent Commission for Human Rights, the State of Palestine’s national human rights institution whose main role is to scrutinise the Palestinian authorities. He is also a member of a collective of Palestinian, community-based resistance groups that organise marches, strikes and legal campaigns.

Both men have faced terrible treatment while in detention, and between them they face dozens of charges relating to their activism, including ‘wilful damage to property’, ‘incitement’, and ‘insulting a soldier’.

Some of the charges – such as ‘participating in a march without a permit’ – are not even internationally recognisable crimes.

Others relate to protests that the men weren’t actually at, or are made up of false testimonies, such as an accusation that Farid pushed a soldier – while video evidence proves that in fact the soldier pushed him.

When we spoke with Farid recently, he described in terrifying detail what happened when he was arrested at a demonstration in Hebron last year. As he was bundled to a military court, he was put in a box the size of his own body, blindfolded, “with only a small hole to breathe through. It felt like I was in a grave."

The reason Farid fights back against this treatment is simple: “We will be slaves if we don't resist the Israeli occupation”.

"We want to be equal"

The charges against both Issa and Farid are baseless – they are simply being punished for their work as activists.

“We don’t want to destroy Israel,” Issa told us, “We want to be equal.”

All Issa and Farid want is their home back and to live in a fair and just society, free from discrimination and violence.

That’s why we are urging the Israeli authorities to immediately drop all the charges against both men, and to stop harassing them and other human rights defenders in the Occupied Palestinian Territories.

Join us in standing by Issa and Farid and share their story now:

Want to know more about what's happening in Israel and the Occupied Palestinian Territories? Find out now