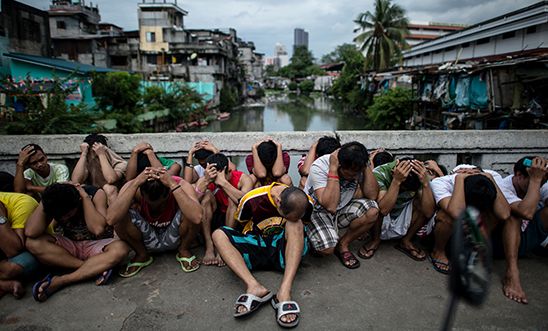 Thousands of people have been killed by police since President Rodrigo Duterte took office in the Philippines in June 2016 – including up to 60 children.

Yet not a single police officer has been held to account for any of the crimes committed.

That’s why we’re calling on the International Criminal Court (ICC) to urgently open an examination into crimes against humanity taking place on the streets of the Philippines.

Killed by the police

In a report published earlier this year, we revealed how the country had been carrying out a ‘war on drugs’, which led to the police killing – and paying others to kill – thousands of alleged drug offenders in a huge wave of extrajudicial executions.

More than 7,000 people were slaughtered in the six months between July 2016 and January 2017 alone. Shockingly, dozens of children are also included in this deadly toll.

Carl Arnaiz, a 19-year-old honour student, was among dozens of children and teenagers killed in Duterte's drug war in the Philippines https://t.co/8hozHMQDKw pic.twitter.com/8irUZ9vQmb

Our research team on the ground in the Philippine capital of Manila witnessed large numbers of children suspected of drug-related offences being kept in overcrowded and unsanitary holding centres for minors.

Some said they had been beaten and tortured by police on their arrest, and claimed police had framed them by forcing them to pose in photographs with drugs that had been planted.

Family members told Amnesty they witnessed police shoot children dead at point-blank range as they were begging for mercy.

‘They pointed a gun at my head [and] told me to get out… I heard shouting and three gunshots, then three more shots.’ O, the partner of a 17-year-old victim, who was killed after he was woken up in the middle of the night.

The killing of 17-year-old Kian delos Santos in August sparked a national outcry. Police claimed Kian had been shot in self-defence, but CCTV footage and eyewitness testimony showed how plainclothes officers dragged away the unarmed teenager and shot him dead in an alleyway.

More than 12 police officers have been investigated for this killing after the case received international attention – but no one has yet been held to account.

Action on crimes against children

‘How many bullet-riddled bodies must be found dumped on the streets before the international community takes action?...The blatant lies by officers to try to cover up their role in the cold-blooded murder of a child shows that the police cannot be trusted to investigate themselves.’ James Gomez, Amnesty’s Regional Director for Southeast Asia and the Pacific.

The way the Philippines’ ‘war on drugs’ is being carried out meets the criteria for crimes against humanity, and the ICC must act now.

Since 2016, President Duterte and other high-level government officials have openly advocated for killings, which could amount to criminal responsibility under international law.

We have been working on this case for many months but the Philippine authorities have so far ignored our calls to end the extrajudicial executions. We have also urged them to stop the incitement and encouragement of such killings by high-ranking officials, including from President Duterte himself, but nothing has changed.

The ICC must open an examination into the situation immediately. They must bear in mind that responsibility is not just limited to those pulling the trigger, but also those who order or encourage murders and other crimes against humanity.