What does Brexit mean for human rights? 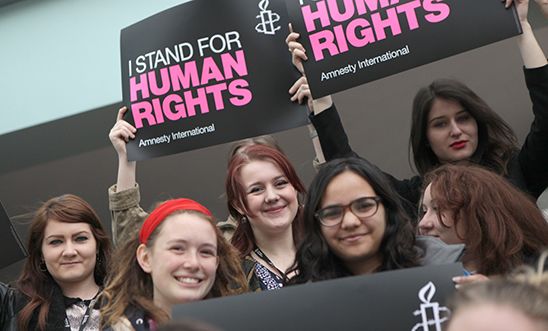 Written by Allan Hogarth, Head of Advocacy and Programmes at Amnesty International UK

So it’s official, the Prime Minister has triggered Article 50 and we are leaving the European Union.

Following last June’s decision to leave the EU there’s been much speculation over what this will actually mean for the UK and those living here. Almost every time we turn on the television, pick up a newspaper or go online we are invited to listen to politicians, pundits and an array of experts give us their thoughts.

What is absent from these debates is any meaningful consideration of what Brexit means for human rights. It could be positive – the government could choose to use this as an opportunity to strengthen the rights that we have fought long and hard for. Or it could not be.

One thing’s for sure: we will be fighting to ensure that all human rights are protected and safeguarded as the UK negotiates its exit. Here are just a few of the things to watch out for.

Ensuring EU migrants have the right to remain

On 7 March the House of Lords voted to change the Bill that would launch the process of leaving the EU – they asked for it to offer EU nationals already living here confirmation that they would be able to continue doing so.

On 13 March Parliament voted to reject this change.

This is a great disappointment and sends a worrying signal that rights will be dragged into the exit negotiations. That people and their families will become bargaining chips as the government determines the terms on which we will leave the EU.

To send a clear signal that they won’t trade away our rights the government must resolve this insecurity as a priority.

In the wake of the referendum we saw a shocking rise in reports of racist and xenophobic incidents.

During it we witnessed unedifying and morally bankrupt language being used by some politicians and the media.

As Article 50 is triggered, we need to come together to show that this is not what a post-EU UK looks like.

Those involved in the political debate or seeking to influence negotiations on the UK’s withdrawal must not resort to inflammatory and toxic language. In our communities and on our streets, we must treat each other with respect.

We must come together and stand against hate.

The impact on UK law

From protecting the rights of women and girls, LGBTI communities, workers’ rights and our rights to privacy, to the mechanisms that work to control the arms trade – many of the rights protections we have in the UK have come from the EU.

These are our rights and we must work together to defend them – to ensure they are maintained once we leave.

Ripples around the world

Just as we look to protect our rights here in the UK, we must also explore the global impact Britain’s withdrawal from the EU could have.

Prime Minister Theresa May recently embarked on a branding exercise promoting a post Brexit Britain that will engage across the world and be prepared to stand up for its principles. But we are yet to have a clearly defined picture of what this Global Britain will look like. We’ll be working to make sure it is a positive force for human rights – leading by example and raising the bar.

As part of this, we want the government to ensure the UK’s well-established position on several key international bodies - including the UN Security Council, UN Human Rights Council, NATO, the Commonwealth, G7 and G20 – is used to seize new opportunities to promote and enhance human rights as they establish relationships and alliances with others.

The Prime Minister has said that the UK ‘…should seize the opportunity to get out into the world: yes, to build new alliances but more importantly, to go even further in working with old friends…’

And the government has wasted no time in catching up with old friends or building new alliances. Ministers have been jetting here there and everywhere as they seek to secure trade deals and establish bilateral relationships. They’ve been busy visiting Turkey, Bahrain, USA, UAE and will soon be off to China.

Trade and security are no doubt legitimate pursuits of the government. But we all need to be alert to them being used as an excuse to de-prioritise or turn a blind eye to human rights.

Over the last few decades we have worked hard to ensure human rights concerns sit at the heart of the arms trade – and the trade in military, security and police equipment more broadly. We have worked with partners across the world to ensure that trade is not done where there is risk that it could contribute to human rights abuses.

Many of these checks and balances sit within EU mechanisms, and the UK government must maintain its commitment to them as we leave.

Trade, security and human rights should be complementary, not mutually exclusive. The government must not be tempted to be silent on human rights issues to secure trade deals.

Over the next two years, as the government negotiates the terms on which we leave the EU, we will be fighting to ensure no existing rights are lost.

But more than that, we want the government to use this as an opportunity. They could improve our rights. They could strengthen protections and commitments. And we will not stop fighting until this is what a post-EU UK looks like.

Are you with us?